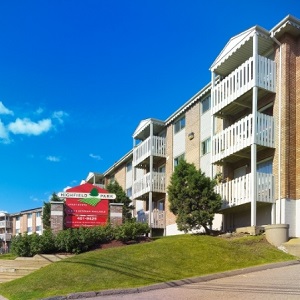 The Highfield Park portfolio in Dartmouth, N.S., has been purchased by Westdale Construction and Urbanfund Corp. (Image courtesy of Urbanfund)

Westdale will have an 80 per cent share and Urbanfund will have a 20 per cent stake in the newly incorporated Highfield Park Residential Inc., which will acquire the portfolio for $113 million from Oxford Properties.

“We have a large portfolio in the province of Quebec that we own 10 per cent of and Westdale owns the remaining 90 per cent,” said Urbanfund president and chief executive officer Mitchell Cohen. “That’s about 1,600 apartment suites in Quebec City and Montreal.

“So this is not virgin territory for us. We work well together with Westdale.”

Highfield Park is comprised of 20 low-rise buildings on a 37-acre site in a residential neighbourhood that’s served by public transit. Apartment sizes range in size from bachelor units to three-bedroom suites, and some come furnished.

“We’re always looking for upgrades and things that we can do to generate additional income for us,” said Cohen. “But for the time being, we’re just happy to take it over in early to mid-October and start running this great portfolio.”

Highfield Park is 95.3 per cent occupied, which is consistent with the Dartmouth average. The goal is to drive occupancy by leveraging its location next to the Highfield Road transit terminal, which provides direct access to downtown Halifax, the 1.7 million-square-foot Dartmouth Crossing power centre and the 9.7 million-square-foot Burnside Industrial Park.

Westdale is involved in another partnership that owns properties in Halifax and Cohen said he acted quickly when presented with a “really incredible opportunity” to acquire such a large portfolio in a desirable location.

“It’s an area of high employment, especially with the naval contracts. What particularly draws us is the high level of education out there, with a number of universities and community colleges. It’s quite a well-educated workforce and we’re excited to be part of that marketplace.”

“We’re working away at increasing our net operating income and looking for more opportunities in Kitchener,” said Cohen.

It’s comprised of two industrial buildings with 40 units, aggregating 64,000 square feet, and is 94.2 per cent occupied. The goal is to renovate the property, convert it to condominium title and sell the units to current tenants or other investors.

“We’ve received a number of our approvals from the City of Brampton and are working to start selling off the condominium units,” said Cohen. “We’re quite happy with that opportunity and are looking for some more industrial opportunities.”

Urbanfund, which has a market cap of around $25 million, released its financial results for the six months ended June 30 on Aug. 29. It had assets of $68.71 million and $2.4 million in funds from operations.

“We’re not on everyone’s radar screen, but we continue to work away and make prudent decisions,” Cohen said of the investment community’s reaction to the company, whose Ontario portfolio also includes properties in Belleville, London and Toronto.

Urbanfund invested $2 million in a development at 1 Bloor St. E. in Toronto in September 2009 in exchange for an indirect 3.33-per cent interest in the project. The 76-storey, Great Gulf-built One Bloor mixed-use condominium and retail tower is now occupied and Urbanfund’s investment has been repaid.

It will receive periodic payments over the next several months as its return on the investment.

“It was a great opportunity and it was a long time coming, but it was well worth the wait,” said Cohen.