Why did Genesis CEO, CFO leave the company?

A rift between management and the board in terms of outlook and strategic plans were the reasons behind the surprise departure last month of the top two executives at Genesis Land Development Corp. (GDC-T) 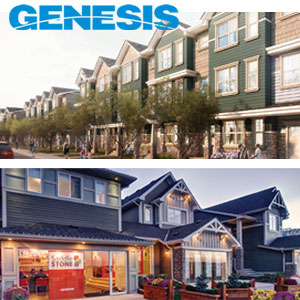 The Calgary–based land developer and residential homebuilder announced in mid-February president and chief executive Bruce Rudichuk and executive vice-president/chief financial officer Mark Scott had left the company. No reasons were provided in a terse press release.

Stephen Griggs, chairman of the Genesis board and now top executive as interim CEO, gave a brief explanation of what occurred.

“It was a combination of a difference of view of the long-term strategic direction of the company and a perhaps slightly different view of the impact of the economy in Calgary on the company.”

“Had proposed a significant change”

Griggs, who is the largest shareholder of Genesis, said the now-departed duo “had proposed a significant change to our existing strategy which the board was not prepared to adopt.”

He would not elaborate, citing the Calgary outfit’s status as a public company. (It is also releasing earnings in a few weeks).

The interim CEO did say that with the departures, the Genesis playbook of the past few years will continue to be followed.

“We have a great deal of land on the balance sheet at the moment and we need to optimize the value of each piece of land, each property that we own.”

A riskier road not taken?

The shot-down plans of the former CEO and CFO might never be known, but reading between the lines, it appears they were more ambitious than the board was comfortable with.

At least that’s a logical takeaway given Griggs’ description of the board’s outlook for the recessionary Alberta economy.

“I think the board is very cautious in allocating capital at a time when the local economy is very uncertain and it is impacted by global factors that nobody has any control over,” Griggs said.

“So this is a time to be cautious, recognizing that the company is very well-capitalized and has very little debt, which is an incredibly strong position to be in in a downturn in the market.”

Does that make Genesis buyers in a bargain-priced market?

“It is possible. We are not intending to do any acquisitions, but you never know. What we are seeing in the market is that most other landowners like us are also very well-capitalized. The industry learned a lot from the last couple of downturns, and their lenders learned a lot too.”

No hurry to hire a new CEO

Genesis looks like it will take its time refilling its corner office, while hiring a CFO will be accomplished “in the near future,” the company said last month.

Griggs, the largest shareholder through his role of CEO of Smoothwater Capital Corp., has been a CEO or chief operation officer “of several large Canadian businesses over the last 20 years” and is also a member of the Law Society of Upper Canada.

Griggs, along with fellow directors Iain Stewart and Steven Glover, will run the company and search for CEO and CFO replacements in the meantime.

How long will it take to find a new top executive?

“We have had some progress. On the CEO position. I think it will be a number of months. We need to let things settle down and take our time to find the right person to be leading the company.”

“It is a limited market of people and there are changes happening in the industry, so it will take some time.”

Griggs also said Genesis will not take special measures to deal with the company’s slumping stock price, which has fallen from around $5 per share a year ago to just over $2 recently. (Last year, Genesis said it had a pre-tax net asset value of $8.69 per share).

Genesis does have a normal course issuer bid which can allow it to acquire stock, however.

“Beyond that, we don’t have any immediate plans. It is unfortunate (with) a public company . . . these things happens sometimes. There is a disconnect between real value and what the market is perceiving and often it is because of a lack of liquidity in the stock (a reality with Genesis).”

Griggs’ Smoothwater Capital owns 33.6 per cent of Genesis’ stock and there are a few other large shareholders in the 10 per cent-plus range, making it “a fairly closely held company in many respects.”

Based upon a mid-2015 Genesis investor presentation, the company has five main developments underway or planned in the greater Calgary area:

“There is a lot of stuff happening, sales are continuing and we have a decent backlog of orders that we are working on,” said Griggs.

That doesn’t mean Genesis is immune to Calgary’s woes, however.

“Things have slowed down, that’s for sure, but we are still selling houses every week.”