RioCan REIT and Tribute Communities have begun a residential development at the former Windfields Farm in Oshawa, Ont., a site which could ultimately also host a major commercial/retail component and two residential towers. 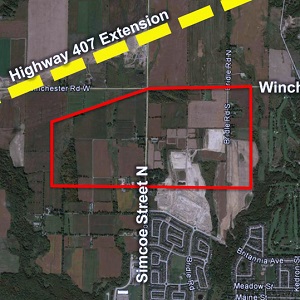 RioCan has partnered with Tribute to develop the residential portion of its Windfields Farm property in Oshawa, Ont.

Servicing is underway at the subdivision, which will accommodate 551 townhomes delivered in three phases. The first phase of 169 townhomes – of which 166 are sold – is scheduled to be complete late in 2018.

The second phase of 119 townhomes is scheduled to be ready for occupancy in the second quarter of 2019, with the third phase completed six months later.

RioCan (REI.UN-T) and Tribute are partners on the residential aspect of the Windfields Farm project, which also includes zoning approval for two 12-storey residential towers. However, the two companies are considering “alternative scenarios” for the high-rises.

This portion of the residential component covers 30 of the 116 acres of developable land at Windfields. Approximately 20 additional acres are being considered for further residential development.

“This is a prime example of the multitude of opportunities within our portfolio that allow us to create substantial value and generate real and reliable cash flow for our unitholders,” RioCan CEO Ed Sonshine said in a release announcing the start of construction.

The original site plan was approved by Oshawa city council in 2012. The project’s go-ahead coincides with a recent expansion of Highway 407 adjacent to the property, which is also bordered by Simcoe Street in the northern part of the city.

It is located near both the University of Ontario Institute of Technology and Durham College.

Up to 66 acres of the site is slated for commercial development, including a retail component which RioCan says will service both the new community and existing area residents.

RioCan’s current plans for the shopping centre include up to 1.5 million square feet of development.

It expects to begin the retail development in 2018.

“Sites such as Windfields Farm represent considerable land area that enable RioCan to build and shape communities and add to the urban landscape of Canada’s largest cities,” Sonshine said, noting it is just one of numerous developments, or redevelopments, RioCan and its partners have underway.

“Projects like Sunnybrook Plaza (a redevelopment in Toronto), and others in our pipeline are transit-oriented developments that address the needs of municipalities for increased density and enhanced community development near transit infrastructure projects.”

While Windfields Farm is a new development property, RioCan also has identified up to 50 of its existing sites across Canada to consider for redevelopment to increase the performance of its portfolio.

Most of the redevelopments will include partners to facilitate multi-residential components, and several are already underway in cities such as Toronto, Calgary and Ottawa.

RioCan owns and manages Canada’s largest portfolio of shopping centres with ownership interests in a portfolio of 300 Canadian retail and mixed-use properties, including 15 properties under development, containing an aggregate net leasable area of 46 million square feet.

Tribute Communities is a builder and developer with more than 30 years of experience. The company, based in Pickering, Ont., has built more than 30,000 homes across Southern Ontario.