With so much positive activity happening on the office front in Toronto and Vancouver, and generally less positive news coming out of Calgary and Edmonton, it can be easy to overlook what’s happening in cities like Winnipeg. 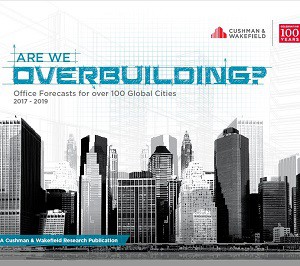 Winnipeg’s projected rent growth of 6.4 per cent between now and 2019 ranks fifth out of 85 cities, trailing only Hyderabad (India), Seattle, Singapore and Toronto. And while Winnipeg’s vacancy rate is expected to rise from 4.3 per cent in 2017 to 7.4 per cent in 2019, that will still rank it as the fifth-lowest in the Americas (behind Toronto, Vancouver, Orlando and Ottawa) and 15th-lowest worldwide.

“Optimistic and active time” in Winnipeg

“It’s a very optimistic and active time, moreso than at any time over the last 30 years in Winnipeg,” said Winnipeg-based Wayne Sato, a Cushman & Wakefield broker and office leasing and sales vice-president.

Sato pointed out there was no significant new construction of class-A office space in Winnipeg for about 25 years before Longboat Development Corporation and Artis REIT’s (AX.UN-T) Centrepoint mixed-use project added about 80,000 square feet in 2015 to satisfy tenant demand for improved workplace environments.

“Once the market is introduced to that, more and more tenants started saying ‘That’s what we need,’ ” said Sato.

While $19 per square foot net was the former high-water mark for Winnipeg office rents, Centrepoint pushed the figure to $25.

“Prior to 2015, tenant expectations weren’t what they are now in terms of the efficiencies and performance of their office premises,” said Sato.

Winnipeg tenants are now taking longer-term strategic views of their office space, according to Sato. Lease terms that used to average between seven to 10 years now range from 10 to 20 to allow tenants to look at their cost structures over a longer horizon.

Winnipeg’s downtown is the strongest-performing part of the city, with legal, financial and technology firms driving occupancies. No buildings have a significant amount of empty space, with the exception of an 11-storey former Canada Post building at 266 Graham Ave. that the City of Winnipeg purchased in 2009 and is now looking to sell.

New construction is expected to alleviate some of the demand for class-A office space.

The 17-storey, 365,000-square-foot Scotiabank Tower will be the first to be completed next summer, with Scotiabank and Thompson Dorfman Sweatman LLP as anchor tenants.

“There are a few more development projects on the drafting table, for which we expect announcements coming forward in the next 24 months,” said Sato.

Some other Winnipeg office buildings are undergoing major renovations.

Artis REIT’s 30-storey, class-A 360 Main tower is about three-quarters of the way through a $25-million recladding of its exterior. A high-end class-B building at 330 St. Mary Ave. is also reskinning its exterior and others have either recently finished, or are about to start, similar work.

The 15-storey Medical Arts Building at 233 Kennedy St. was sold by Manitoba Liquor & Lotteries for $15.5 million in April to Timbercreek Asset Management Inc., which is expected to convert it into a mixed-use residential, office and retail complex.

Items of interest regarding other Canadian cities in the Cushman & Wakefield report included: