Winter cities: Let’s embrace the cold in our public realms

Canada is known for many things, from manners to maple syrup, but it’s perhaps our cold and snowy... 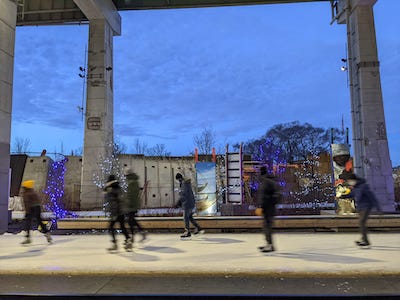 The Beltway skating rink in Toronto, an attraction that helps make a “winter city” more liveable through the coldest months of the year. (Courtesy Naama Blonder)

Canada is known for many things, from manners to maple syrup, but it’s perhaps our cold and snowy winters that most define us.

Cities across Canada experience up to six months of winter weather each year, which can make being outside a challenge. That’s why many prefer to engineer winter out of existence through things like underground tunnels and skywalks.

However, two years in a global pandemic has shown us the importance of recreational outdoor spaces. Parks, trails, patios, plazas and more have been the saving grace of the pandemic, especially during the milder months of the year.

The desire of Canadians to socialize and be together doesn’t stop once the temperature cools and snow starts to fall, though.

This is why the notion of the “winter city” is so important. The winter city is a concept by which cities, mostly northern ones, embrace their frigid climates and get the most out of their infrastructure all year round.

There are many benefits to winter cities.

For one, they encourage people to get outside and be more active, which can contribute to a physically healthier population.

Winter cities can also help with mental health by providing opportunities and spaces to combat winter isolation. They can even be a major attraction for tourism and act as a big economic boost.

So, what can Canadian cities do to embrace the winter city? Cities around the world, including some in Canada and across Scandinavia, are already transforming harsh winters into snowy opportunities. Here are just six examples.

Edmonton stands out as one of the best winter cities because of its Winter City Strategy, adopted in 2013. The strategy has received global recognition and city leaders have presented their ideas to cities around the world. Within Edmonton, the strategy has sparked a number of new programs and events and has maintained strong public support.

The public even got to play a big role in developing the strategy. City staff spent months consulting with Edmontonians on one very essential question: what would make you fall in love with winter in Edmonton?

Citizens and experts had a lot to say. Through these conversations and research of global best practices, the city came up with 10 winter city goals across four areas: winter life, winter design, winter economy and winter story.

Winter life is about making it fun and easy for people to be outside during the winter. This includes improving winter transportation for pedestrians, cyclists and public transit users.

Winter design focused on embracing innovative urban design practices for a colder climate. This includes finding creative ways to capture the sun’s warmth and block the wind that can make -10 C feel like -20 C.

To execute on this goal, the city has even created Winter City Design Guidelines which highlight specific strategies related to streetscapes and open spaces.

Lastly, winter story is all about making sure Edmontonians know about winter in their city and that everything Edmonton does is through the lens of a winter city.

Denmark is another country with a rich and chilly winter season.

In the capital city of Copenhagen, winter is embraced on “the Lakes.” Also known as Søerne, “the Lakes” are located in the heart of the city and are a popular recreational area for strollers and joggers.

In the summer, boats can even be rented. However, in the winter, the lakes freeze over, opening up a whole new set of activities, including ice skating, curling and blokarting – a one-person cart with three wheels that uses the wind to propel its rider.

For post-activity refreshments, there are many restaurants and cafes around the Lakes. Restaurants in Copenhagen and much of Scandinavia also tend to keep their patios open much later into the cold weather than we do in Canada (with the help of some cozy blankets and space heaters).

Montreal: Lighting in the winter

One of the most important principles of good winter urban design is lighting. Because winters come with shorter days and less sunlight, finding beautiful ways to light up the darkness can add visual interest and comfort to an urban setting.

Montreal does this well through the annual Luminothérapie festival. Usually spanning from December to February, Luminothérapie is an interactive art and light installation that could only exist in the darkness of the winter.

However, Montreal is not the only city to acknowledge the impact light can have for a winter city. Similar light festivals exist in Portland and in Pittsburgh.

The small town of Rjukan in Norway even tackled its dark days by installing mirrors at the top of the mountains that surround the town to reflect the sun’s light to the town below. Examples like these illustrate just how impactful good outdoor lighting can be in warming up winter.

Another important aspect to winter cities is good winter programming and almost no one does that better than the Carnaval in Québec City. The Carnaval has been taking place since 1955 and is the largest and most popular winter festival in the world.

It brings in around $38 million a year and supports 600 jobs. It usually runs from late January to early February and features an ice palace, night parades, an ice canoe race, ice sculptures and a cheerful snowman mascot named Bonhomme Carnaval.

The festival is not only a celebration of French-Canadian culture, but of the region’s cold and snowy climate, too.

The attractions could only happen in such a winter wonderland, with no attempts to hide or reverse the shiver-worthy weather. There’s even a snow bath where participants frolic in the snow in nothing more than bathing suits. It’s hard to imagine anything more winter-friendly than that.

While the lingering pandemic may reduce the amount of international tourism usually attracted by Carnaval, the festivities and traditions make for a joyous winter celebration for local and regional residents.

The City of Toronto may not have a formal winter strategy, but there are a number of winter-friendly gems scattered throughout the city, including the Bentway, Distillery Winter Village and Winter Stations on the beach.

What makes all of these spaces unique is they take existing areas and transform them in the winter to become all-season experiences. Plus, all three are created and maintained by private and philanthropic groups, showing it isn’t just municipal planning departments that can build a winter city.

The Bentway is a public space under the Gardiner Expressway that opened in 2018. The area is constantly filled with public art installations, community programming and performances. A skating loop and other winter-themed programming allow for year-round use.

The Distillery Winter Village, in the heart of the historic Distillery District, is one of the most popular tourist attractions in Toronto. The village is filled with small cabins where merchants sell a variety of goods and there are plenty of nooks with small bonfires and cozy chairs to sink into.

Perhaps not as well-known as the Bentway or Winter Village, but equally as impressive are the Winter Stations on Toronto’s beaches.

Winter Stations is an international design competition with participants designing temporary art installations around the lifeguard towers on the Kew and Woodbine beaches. Each year, four to six designs are selected for a six-week exhibition.

Beaches may not normally be a prime destination in the winter, but the Winter Stations challenge that norm.

The City of Lahti is differentiating itself as a winter city through a unique form of sustainable transportation. Many cities have bike-share programs, but Lahti is the first to experiment with a public ski-sharing program.

The plan was announced in January 2021 after the city was chosen as the European Green Capital of the year. Advocates behind the idea thought it would be an interesting way to encourage even more active transportation in the city.

Just like bike shares, skis can be checked out from one point and returned to another one in the network.

The project is still in its piloting stages so there are only three points currently, but this could expand if the idea resonates enough with residents and tourists.

Public ski-sharing may only be possible due to the city’s unique heavy snowfalls, but it represents a creative way to turn a winter barrier into an opportunity – and that’s something all cities can learn from.

Try as some cities have, there is no escaping winter.

Instead of fighting it, cities should welcome winter – not just during the pandemic, but afterward, too. Getting people engaged and outside and connected with nature, even in the winter, can create a healthier population and even encourage tourism.

Once we start seeing winter as an opportunity for unique public space experiences, we open ourselves up to a whole new world to explore.

The examples discussed here are diverse. Winter cities can be defined by anything from large festivals to ad hoc events to small-but-mighty policy changes.

Cities don’t need to reinvent the wheel or spend millions to make a city more winter-friendly. It simply comes down to changing attitudes about what winter can be and what it can mean for a city.

How that manifests differs across cities, but it can be done anywhere.

What does inclusionary zoning really mean for Toronto?