A pair of developers are planning to build the world’s tallest Passive House structure in Vancouv...

A pair of developers are planning to build the world’s tallest Passive House structure in Vancouver. 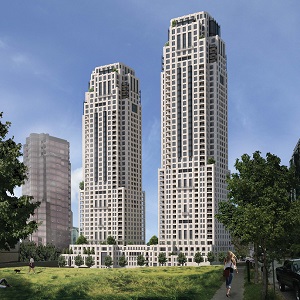 Landa Global Properties and Asia Standard Americas have submitted a rezoning application for a two-tower rental home and condo development at 1400 Alberni Street in downtown Vancouver.

Passive House is a green building standard developed in Germany that boosts energy efficiency and comfort, and it reduces a building’s greenhouse gas emissions. There are about 1,150 Passive House buildings worldwide.

Canada’s first Passive House was built in Whistler, and there are now seven certified buildings in Canada — all but one are in B.C., according to the Passive House Database.

The two new towers in downtown Vancouver will climb to 48 and 43 storeys, respectively, and will include 450 homes, including 129 rental units, and a daycare, said Kevin Cheung, Landa’s CEO.

Cheung told RENX Monday they hope to complete construction of the towers by 2022 if everything goes to plan. “Having grown up in Vancouver, I understand the importance of preserving our natural beauty and the environment, so . . . as an ownership group, we saw an opportunity to take leadership,” he said.

“This is going to be the tallest Passive House in the world,” Cheung said.

The towers, when completed, would climb higher than The Bolueta, a twin-tower Passive House project currently under construction in Bilbao, Spain that will climb to 28 and 31 storeys. That structure is expected to complete early next year.

Expected to spark other towers, suppliers

The towers would hopefully inspire other developers in other major cities around the world, Cheung said.

“The city is excited to see industry leaders like Landa Global Properties and Asia Standard take on such an innovative project,” said Gil Kelley, the City of Vancouver’s general manager of planning, urban design and sustainability.

“There will be tremendous value for the trades, manufacturers, designers, builders and developers to learn and find innovative solutions to see these towers built to the Passive House standard,” Kelley said in a release. “Those solutions will translate into better and healthier homes for the families who will occupy them.”

Vancouver’s Recollective Consulting is the Passive House consultant on the project.

The project involves several unique challenges, said Recollective CEO Eesmyal Santos-Brault. The building will be constructed out of concrete, but will have to include significantly improved insulation, including insulated wraps of the balconies, he told RENX.

“When it comes to mechanical equipment, just to pressurize that many floors and provide ventilation, you need much larger equipment than for a smaller, residential development,” he said. “That equipment must also meet the Passive House level of efficiency and there’s none right now of the size that we need that meet Passive House.”

He said they will be working with mechanical manufacturers to innovate the specific types of equipment needed to meet the certification requirements.

“Not enough suppliers in Canada or the U.S.”

“There’s actually not enough suppliers of Passive House-certified products in Canada or even the U.S.,” he said. “That makes our selection very narrow and also doesn’t really make for a really competitive market when there’s only a few out there.”

This project should help spark more competition and innovation among suppliers, he said.

Santos-Brault said the owners and renters of the units in the towers should notice a major savings on their utility bills. “I think that it’s quite safe to assume you’d have at least a 50 per cent savings in heating costs,” he said.

The Passive House towers could turn out to be a major precedent-setter, he said.

“If we can nail that, I think that’s awesome and I think we’ll see other cities around the world hopefully copying and replicating this concept.”