CRE runs in the family for Yuhu proptech founders

The sons of two prominent Canadian real estate industry executives are forging their own path in the property technology field with Yuhu Inc. 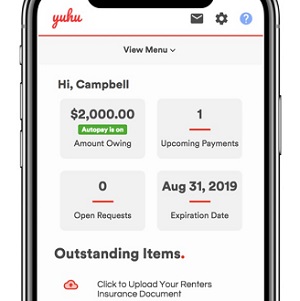 Image depicts a portion of the Yuhu tenant portal, displayed on a smartphone. (Courtesy Yuhu)

Yuhu is a property management platform focused on leveraging technology to improve the tenant experience in residential and commercial assets while driving cost savings and operational efficiencies for customers.

“Unlike many of the players in the market, we built the platform with an operations-first approach,” said Courteau. “We empathize with our clients’ need of a platform with intuitive user experience while having robust functionality to manage their day-to-day operations.”

Yuhu uses a progressive web application which looks and feels like an app, but is run by a web browser compatible with any device or browser. The company has also built mobile applications for inspections because those tasks sometimes require offline functionality.

Toronto-based Yuhu works with small, medium and large customers across Canada. Its target residential customers have more than 1,000 units. On the commercial side, it targets customers with more than 2.5 million square feet of space under management.

“We have partnered with some of the largest and most forward-thinking industry leaders in the Canadian real estate market to build a platform that’s aligned to their business needs,” said Courteau. “This has given us the opportunity to not only work with the brightest in the business, but have our solutions vetted by them, too.”

Yuhu offers customers a traditional software-as-a-service pricing model, where they can pay monthly, quarterly or yearly.

While Yuhu has been completely self-financed to this point, Courteau said it has received “a good amount of interest” from potential investors. The company is most interested in investments from strategic partners who can advance the business, and not merely provide funding.

“We’re waiting for the right opportunity or we can continue to do it ourselves because, with the companies in our pipeline and partnerships we’re building out, we have enough to keep us going for a while,” said Courteau.

“He helps with everything from finances to strategy and how to go through an RFP process. The people we’re selling to are in his role, so he really allows us to look through the lens of a CIO of a real estate company.”

The third adviser is Barry Eisen, who recently left his role as executive vice-president of mergers and acquisitions for Altus Group to start his own company.

“He led mergers and acquisitions for Altus Group and saw, vetted and made all of the deals on the tech acquisition side,” said Courteau, “so he knows what a good tech company looks like and knows how to value one.

“On the flip side, he’s also an accountant and the former CFO of Greenwin, which is a large real estate asset manager and property manager. He was also one of the guys who we sell to.”

Eight people now work at Yuhu and the company is hiring more as it plans to explore expansion into the United States and Europe in mid- to late 2019.