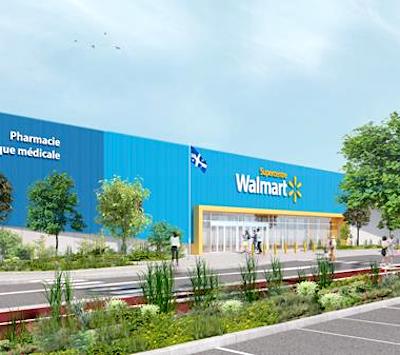 Marché Central owner and developer QuadReal Property Group has confirmed Walmart will occupy a state-of-the-art 140,000-square-foot store with “sustainable features” as an anchor tenant at the Montreal power centre.

The announcement Tuesday morning puts a major emphasis on the $20-million store’s sustainability aspect, which will include: a 125,000-square-foot green roof; a natural refrigerant for the store’s refrigeration system; LED lighting; ultra-low-flow lavatories, urinals and water closets; recycled content within its building materials; and low VOC finishes.

“We are thrilled to be adding Walmart Canada (WMT-N) to our retail offering at Marché Central, especially a partner who shares QuadReal’s commitment to environmental responsibility through waste reduction, waste management and green roofs,” said Andy Clydesdale, executive vice-president of QuadReal, in the announcement.

“Our goal with Marché Central’s Phase 6 expansion is to strengthen the value-oriented offering, enhance tenant synergies and solidify Marché Central’s dominant position in both Montreal and Canada. Walmart is central to that retail strategy.”

It is situated on an adjacent 30 acres of land recently released by QuadReal for development at the central Montreal property.

The store is scheduled to open in summer 2023 and will join 60 existing tenants — including value-based outlet brands, service retailers and large-format stores.

Marché Central is currently comprised of five retail phases. It contains 16 campus-style buildings equalling a gross leasable area of over one million square feet. Among the other major tenants are Costco, Réno-Depot, TJX brands and Staples.

The new Walmart will be capable of serving customers both in-store and via online purchases.

The company says it will hire approximately 300 associates to work at the Marché Central location.

“Montreal is an extremely important market for us and we’re incredibly excited to be growing in Quebec,” said Cyrille Ballereau, Walmart Canada regional vice-president for Quebec, in a prepared statement.

“More Quebecers are choosing to shop with us online via curbside pickup and this unique store design will allow our associates to better serve busy families to save them time and money.

“We’re also implementing several sustainability features because Walmart’s goal is to make as light a footprint on the planet as we can.”

Walmart Canada has 71 stores in Quebec and more than 14,500 associates across the province.

The sustainability features will build on initiatives QuadReal has taken at the site, which include rain gardens in the parking area, revegetation of portions of the site to reduce the heat-island effect and electric vehicle charging stations.

About QuadReal and Walmart

QuadReal is a full-service real estate operating company, which also invests in equity and debt in both the public and private markets.

Its flagship online store, walmart.ca, is also visited by more than 1.5 million customers daily. It also operates a nationwide network of distribution centres to service the stores and online customers.

The company employs over 100,000 across the country.

Back to drawing board for Darwin/QuadReal redevelopment

2021 the ‘Year of the suburbs’ in Montreal apt. investment