A 22-acre industrial development site in Delta in Greater Vancouver has been sold to Beedie in th... 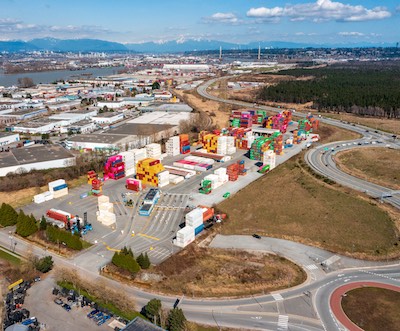 The so-called Delco industrial property along 80th Street in Delta, B.C., has been sold to local developer/owner Beedie, according to the CBRE Vancouver office. (Courtesy CBRE Vancouver)

A 22-acre industrial development site in Delta in Greater Vancouver has been sold to Beedie in the largest industrial transaction ever brokered by CBRE’s Vancouver office.

The value of the transaction was not released by CBRE, but the so-called Delco site at 7590, 7664 & 7688 80th St. in Delta was the subject of an intense bidding process, with a total of 14 offers received. That’s reflective of the site’s proximity both to the downtown and to major transportation hubs.

The site is within the Tilbury industrial hub, at the intersection of 80th Street and Highway 17 (the South Fraser Perimeter Road).

“It is incredibly rare for a site of this scale, especially in close proximity to the urban core, to be brought to market. The scarcity of industrial product, as evidenced by vacancy hovering (just) above zero per cent, has created an insatiable demand for industrial land that has inevitably spurred a competitive environment,” said CBRE senior vice-president Steve Brooke in comments emailed to RENX.

“This deal received 14 offers, with over a billion dollars looking to land in a market that is already constrained.

Delco site to be redeveloped

Most of the site is undeveloped and has been used as a storage yard. In its marketing brochure, CBRE reported the site will be vacated by the end of Q1 and is already zoned for a variety of industrial uses.

It is about a 20- to 25-minute drive from Deltaport, the CN intermodal terminal and the Vancouver airport.

“Metro Vancouver remains an incredibly challenging market to navigate when you have owner/occupiers, developers and investors all competing for the same space,” Brooke said. “We’re seeing purchasers become much more aggressive with the terms they propose from unconditional offers to larger security deposits.

“We’re definitely experiencing more purchasers perform added due diligence upfront to remain more competitive by making unconditional offers; what was perhaps most interesting is that this is happening despite given the magnitude of these transactions.”

CBRE reports the industrial vacancy rate for Metro Vancouver has dropped to a record low of 0.6 per cent as of the end of 2021 and in Delta it is even lower – at about 0.3 per cent.

This is driving leasing rates ever higher, up 20 per cent since the onset of the pandemic early in 2020 and continuing to climb.

“It is paramount to consider the fast-pace momentum of the current market,” Brooke said. “We’re seeing lease rates and sales value changing on a weekly basis and do not foresee this changing any time soon.”

Plenty of construction, but most is pre-leased

Brooke said despite a record high of 9.4 million square feet of industrial space under construction, nearly 80 per cent of is spoken for, which continues to present challenges to local occupiers.

“We can expect continued vacancy rate compression as occupiers look 18-24 months from occupancy to secure a home for their business and lease rate escalations of nearly 10 per cent can be expected for the upcoming calendar year.”

Beedie is the largest private developer, owner, investor and property manager in Western Canada. It is active across multiple commercial real estate sectors and the multiresidential sphere through its Beedie Living vertical.

Vancouver-headquartered Beedie also has offices in Burnaby, Calgary and Toronto.

In the industrial sector alone, it has developed over 30 million square feet of space in B.C., Alberta and Ontario. Recent major projects include the 523,000-square-foot Sobeys distribution centre in Surrey.