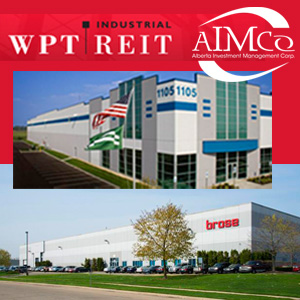 The deal to acquire approximately 10% of the trust’s shares was done to avoid tripping a poison pill shareholder rights agreement that was waived at the trust’s annual meeting this spring. It follows a deal in January by AIMCo to buy a 19.9% holding in WPT.

“Effectively they replaced our previous capital partner Almanac (Realty Securities LP)”, said Scott Frederiksen, WPT’s chief executive. “So now we have exchanged a private equity limited resource found with what I would call a home town, unlimited cheque book equity partner who is going to be real supportive of the REIT going forward.”

The Minnesota-based and TSX-traded trust has a portfolio that includes 46 warehouse and distribution industrial properties and two office properties  making up about 15 million square feet of gross leasable area in 13 States.

What’s in it for AIMCo?

For Alberta-based AIMCo, one of Canada’s largest and most diversified institutional investment managers with about $90 billion of assets under management, the WPT stake represents an investment in a growing segment of the U.S. economy, says the WPT Industrial REIT chief.

“Clearly it is exposure to U.S. logistics and industrial space. You can’t pick up the paper without reading about Amazon and logistics. I think everybody today is of the opinion that the trade is short retail and long logistics and you layer on top of that a bet on the U.S. economy which is strong as hell and growing.”

WPT has a good track record of growth, he added, and it is not as easy as it might appear for big money investors to buy into the overall industrial space.

“There has been a lot of institutions globally, not just AIMCo, that have wanted exposure to that space and there are not a lot of public REITs either in Canada or the United States that allow people to make that bet. We are one of the few.”

Frederiksen noted that for the REIT, it’s nice to be a landlord. As for prospective purchaser, not so much.

“As a landlord, it is probably one of the best times in my 30-year career,” he said. “Our portfolio is 99% leased, the rents are trending up, people are renewing and not asking us for any money to stay. I mean it is a great time to be a landlord of commercial real estate.

“The other side of that coin is, because there is so much global capital that wants to be in our space, the prices are popping. So it is a great time to own, not necessarily a great time to be aggressively deploying massive amounts of capital because you are doing so at the top of the cycle.”

WPT’s solution? Pursue off market deals that might have development opportunities that present value add possibilities.

It is a strategy to avoid “just going out and blindly throwing cash in a market. There is a time when that works, but it is typically a dislocated market, not a super healthy market and the market is very healthy right now.”

To illustrate how frothy the U.S. market is, WPT’s last big acquisition was in the first quarter of 2015 when it acquired 2.3 million sq. ft. in Memphis.

Another reason WPT has not been busy on the acquisition trail is because its directors when through a lengthy review “to explore strategic alternatives,” a process that could have resulted in a selloff of assets in bits and pieces or in one large transaction.

“We thought one likely outcome was we would sell the whole thing,” said the REIT’s CEO.

The review ended with the entry of AIMCo into the picture as a long-term minority shareholder.

With its future more certain, the REIT is intent on growing again.

“When we came out of the review process we kind of geared up our acquisition process again so I think you will see stuff in the not too distant future but we lost the better part of a year there with our strategic review.”