Allied Properties REIT (AP.UN-T) has had a busy couple of days, announcing a major Toronto joint venture with Westbank will proceed, while adding a key downtown property to its portfolio. 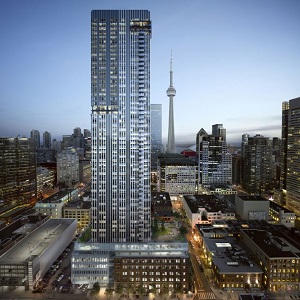 Allied Properties and Westbank have announced they will proceed with a mixed-use project at 19 Duncan St. in Toronto. (Rendering courtesy Hariri Pontarini Architects)

First, Allied and Westbank announced they are moving forward with the development of a mixed-use downtown property at 19 Duncan St. after revising their plans earlier this year.

In a separate announcement, Allied also said it has purchased 70 The Esplanade, adding to a significant portfolio of properties it owns along that downtown Toronto block.

The decision to move forward with 19 Duncan also allows Allied and Westbank to expand a relationship which, according to Allied Properties president and CEO Michael Emory, is working very well on several fronts.

“It is proving to be a productive and successful collaboration between two different organizations — one a public REIT and the other a private developer — that share a common vision for city-building in major urban centres,” Emory told RENX.

The two companies are also partners on TELUS Sky in Calgary and a Japanese lamp-inspired office tower in downtown Vancouver scheduled to be completed in 2020 (as reported at the time by RENX).

The 19 Duncan development includes a new 57-storey tower which will be built to incorporate an existing heritage office building, originally known as the Southam Press Building. Constructed in 1908, the Southam building has 62,000 square feet of gross leasable area.

“Allied and Westbank continue to believe it’s the optimal use of this particular piece of land, both economically and socially,” said Emory, who declined to reveal more specific details about the three components.

The structure has been designed to a LEED Core and Shell Gold standard. Construction is expected to start this year.

The office space has been pre-leased to an unidentified user. The apartments won’t be leased until the structure is completed, which is scheduled for early 2021.

The City of Toronto‘s planning department released a report earlier this year that recommended changes to the way some heritage aspects were handled and also sought changes to the tower. It was designated a heritage property in December 2016, more than a year-and-a-half after Allied and Westbank’s proposal was first submitted.

“The office component was enlarged and reconfigured with a view to providing even better urban work space,” said Emory.

Toronto-based Allied is an owner, manager and developer of office environments and specializes in the adaptive reuse of light industrial structures in urban areas.

Vancouver-based Westbank has more than $25 billion of residential, office, retail and hotel projects either completed or under development in Canada and the United States.

Allied announced on Monday it had entered into an agreement to acquire 70 The Esplanade in Toronto for $17 million in cash from a private family ownership group. The property is immediately adjacent to 56 The Esplanade, which Allied purchased in June.

The new acquisition was built in 1880 to manufacture flour milling equipment and has been renovated and retrofitted over the past three decades.

It includes 6,109 square feet of retail at grade subject to a long-term lease with the recently renovated and expanded Bier Markt. Above that, there’s 19,590 square feet of office space. The building is 88 per cent leased.

The one- and two-storey buildings from 41 to 49 Front St. E. and at 56 The Esplanade have no heritage value and can be replaced with new structures which can be integrated with the heritage components of the assembly.

Allied doesn’t expect to pursue this intensification opportunity in the near term.

Instead of building approximately 133 rental apartments as originally intended, the partners will now sell them as condominium units. The suites are expected to be offered for sale in Q4 2017, with residents taking possession in early 2019.

“The decision to sell the residential portion as condominium accelerated following the recent regulatory changes to the rental residential market in Ontario,” RioCan chief executive officer Ed Sonshine said in a media release. “We fully expect that the sale of these units, that are already under construction, will be very well- received in the market and generate significant gains for the venture.”