Amazon (AMZN-Q) Thursday announced its third major fulfillment centre project in Canada in the past six months. The e-commerce giant will occupy a 450,000-square-foot facility on the B.C. Lower Mainland on Tsawwassen First Nation land at the Delta iPort. 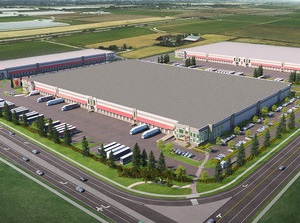 The project is being developed by GWL Realty Advisors on behalf of project owner, the Healthcare of Ontario Pension Plan (HOOPP).

Amazon has already announced, and is currently having built fulfillment centres in Ottawa and Caledon, just north of Toronto. It also announced a facility outside of Calgary late in 2017.

Amazon currently employs more than 2,300 British Columbians, including about 1,500 at its tech hub in Vancouver.

“Since first opening in British Columbia in 2012, we credit our exciting growth to the incredible customers and outstanding workforce of the Lower Mainland community,” said Glenn Sommerville, director of Amazon operations in Canada, in a prepared statement.

“Our ability to create over 700 good-paying jobs with great benefits is thanks to the network of support we’ve received from the Tsawwassen First Nation Executive Council, provincial and community leaders, and strong project partners dedicated to innovation.”

“We are pleased that Amazon has chosen Delta iPort as its newest Metro Vancouver distribution facility,” said Paul Finkbeiner, president of GWL Realty Advisors. “In an industrial real estate market as constrained as Vancouver, meeting the needs of Amazon for facility size and location requires creative thinking.

“By working in partnership with the Tsawwassen First Nation, we were able to create an innovative solution for both Amazon and for our client, HOOPP.”

The agreement with Amazon is for the first phase of the 57-acre Delta iPort industrial park. When complete, the campus will offer nearly one million square feet of modern distribution space across two separate buildings. Delta iPort has been tailored to the rapidly evolving and increasingly complex logistics and e-commerce markets.

Delta iPort is located at 41B Street and Salish Sea Way, adjacent to Port of Vancouver’s Deltaport, within 30 kilometres of both downtown Vancouver and the U.S. border. It’s adjacent to several key transportation routes, including the South Fraser Perimeter Road.

The facility will open in 2019, and will be managed by GWL Realty Advisors.

It will be Amazon’s 10th fulfillment facility in Canada and join Amazon’s current fulfillment centres in Alberta, British Columbia and Ontario. The facility will be used to store and distribute items such as books, toys, small electronics and home goods.

“Tsawwassen First Nation welcomes Amazon to our Lands,” said Chief Bryce Williams in the release. “This is a promising advancement that will continue to unlock the potential of TFN as a leading development partner and key economic driver in Metro Vancouver, and we thank our partners GWL Realty Advisors and HOOPP for their roles in bringing this exciting agreement to fruition.”

Other Amazon projects in Canada

Amazon’s distribution centre in Caledon will be a million-square-foot facility located near the community of Bolton. It will join Amazon’s network of existing Ontario buildings in Brampton, Mississauga and Milton in servicing the GTA and other areas. It will also handle the packing and shipping of small items.

In Ottawa, Amazon is building a million-square-foot centre in the east end of the city, in a rural area at 5371 Boundary Rd. That facility is owned and being constructed by Montreal-based Broccolini.

Amazon is near completion of its other new Canadian fulfillment centre, in the Nose Creek Business Park in Balzac, Alta., just outside Calgary. This building is more than 600,000 square feet and is expected to employ up to 1,000 people.

Construction at Nose Creek facility began in 2017 and Amazon hopes to be shipping from it by late 2018.