Frank Lonardelli has closely tracked the evolution of 17th Avenue S.W. in Calgary into one of the...

Frank Lonardelli has closely tracked the evolution of 17th Avenue S.W. in Calgary into one of the city’s busiest roadways and the founder of Arlington Street Investments is now poised to take advantage by helping build the area into a “high street.” 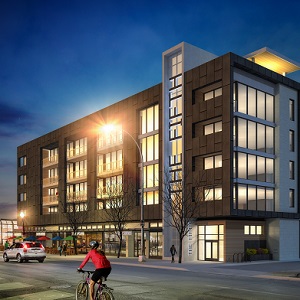 “We’ve been very active,” he told RENX in an interview.

The company recently completed an interior redevelopment and systems upgrade to its National Block building at the corner of 5th Street and 17th Avenue. It’s currently the site of a ground-floor National Pub.

“We’re going to be moving our head office (from 718 8th Ave. S.W.) to the top floor of that building to be closer to all of our developments on 17th,” says Lonardelli.

“It just so happens that the first development that we’re going to be launching is directly across the street on 17th and 5th on the northwest corner, where Waves coffee house used to be, and the apartment block right next door to it which we purchased, and the lot right behind it.”

The Fifth to feature condos, retail

He says Arlington will launch a project called The Fifth at the site. It will be a 45,000-square-foot development with 13,000 square feet of high-profile retail on the main floor.

“And then we’re putting 54 very, very unique and boutique condominiums (on the five storeys above the main floor). It will be very, very high -end. So, that will be our first project and that will be launched in the fall of this year.”

The Waves coffee house has already been knocked down for the new development. The older apartment building, a 12-unit, three-storey structure built circa 1970, will come down in a few months.

“We think that 17th Avenue in the next five to 10 years will be completely transformed into a high street and that’s really what we’re developing into.”

Lonardelli says if you stood at 5th Street and 17th Avenue and drew a mile in circumference, about 25,000 people would live inside the circle.

“That number, based on Calgary Economic Development and all the stats, will be 50,000 within the next decade as that high street gets urbanized and more and more mixed-use residential towers get built up. That’s going to drive more retail, more higher-end retail and more services for the people in that trade area,” adds Lonardelli.

The City of Calgary is rebuilding 17th Avenue, replacing underground utilities and upgrading the road itself.

“The result will be a new 17th Avenue that will serve people who live, work, play and travel in the area for decades to come,” says the city on its website. “We’re investing in 17th Ave., for now and for the future. Rebuilding the 30-year-old road and upgrading the 100-year-old utilities now will make sure the area can continue to grow for years to come.”

The $44-million project will also include:

* improvements to crosswalks and intersections as well as curb extensions on side streets;
* upgrades to water and sanitary utilities for current and future development;
* improvements to sidewalks;
* new sidewalks and repairs;
* burying utility lines;
* LED lighting;
* sitting areas;
* new trees;
* and upgrades to telecommunications, power and gas utilities.

Recently, Arlington sold a building in the Beltline district of Calgary on 10th Avenue S.W. and 7th Street to First Capital Realty (FCR-T) for about $12 million. Arlington had owned the building since 2010, when it bought it for $4 million.

“We were going to hold it for five to seven years in addition to how long we’ve held it, let the lease play out and knock the building down and build a vertical development. But we thought we’d go to the marketplace and just test to see if we could get a number that would make sense for us to say goodbye,” says Lonardelli.

“We were able to generate a cash on cash return of 340 per cent and an IRR (Internal Rate of Return) of 24.3 per cent within the seven-year holding period. This is not only a significant investment return, but it is extraordinary given the backdrop of the Alberta real estate market.”