Artis Real Estate Investment Trust (AX.UN-T) is continuing to shuffle its portfolio and reduce it... 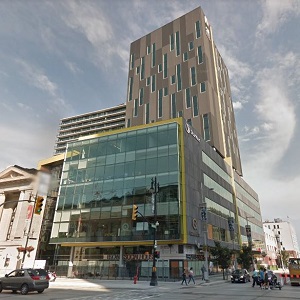 Artis REIT is selling its share of Centrepoint in Winnipeg, one of four buildings the trust is selling. (Google Street View image)

Three transactions arranged during the second quarter of 2018 have closed, Artis said, while the fourth is to close in Q3. Artis did not disclose the purchasers.

Two of the sales involve Calgary properties, while the others are in Burnaby, B.C., and Winnipeg.

The largest of the deals is for Production Court, a 297,727-square-foot, class-A office complex in Burnaby. Artis said the property sold for $100.5 million, or $338 per square foot and a capitalization rate of five per cent.

This transaction closed on June 27.

Also in Calgary, Artis divested 630 4th Avenue SW, a site formerly known as the Birchcliff Building. This 68,069-square-foot, five-storey, downtown Class B office was recently vacated by a major tenant who occupied approximately 90 per cent of the building.

Finally, Artis and its investment partner Longboat Development Corp. have an unconditional agreement to sell the newly constructed downtown Centrepoint building in Winnipeg. The 103,446-square-foot office building is directly across from the MTS Centre arena and entertainment centre, and includes an adjacent, 406-stall parkade.

Artis’ 50 per cent interest of the sale price is $27.3 million – a price per square foot of $527 and a capitalization rate of six per cent.

The transaction is expected to close in the third quarter of this year.

Artis said its net gain on the properties (over IFRS value) is approximately $12.2 million.

Artis CEO Armin Martens during a conference call in March (see related story on Artis) the trust expected to move about $300 million more in properties this year. At the time, he said Artis planned to divest a couple of additional Calgary properties in 2018 providing it could get the prices it wanted in the still struggling market.

When the process began, Artis derived almost 39 per cent of its net operating income from Alberta properties, but that has now been reduced to about 23 per cent.