Avigilon, a Vancouver-based security systems firm, has reached a deal to sell its downtown office tower for more than double the price it paid less than two years ago. 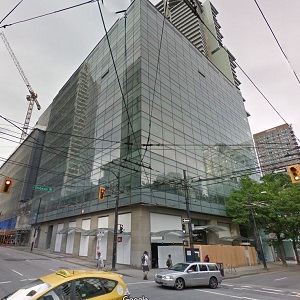 Avigilon sold the nine-storey tower at 555 Robson Street to an undisclosed buyer for approximately $107.5 million. The firm announced the deal last week.

“With Vancouver’s real estate market in a period of unprecedented growth, Avigilon is very pleased with the investment made in the company’s downtown Vancouver office,” Henderson told RENX in an email.

Although terms have not yet been finalized, Avigilon intends to lease back the entire building with certain sublease rights, Henderson said.

“This would give Avigilon full use of the building while reducing its debt, providing cash for general working capital purposes and enhancing shareholder value,” he said.

The building has been undergoing a major renovation. The sale is subject to the completion of the purchaser’s due diligence, the lease agreement, completion of applicable filings under the Canadian competition laws and satisfaction of Avigilon’s obligations under its credit facility,

“Assuming the conditions in the agreement are resolved, Avigilon expects the transaction to close by the end of 2017,” Henderson said.

The building had been stripped down to the concrete and then renovated to increase ceiling heights, boost energy efficiency and modernize the finishings.

The renovations also added a six-storey atrium, a third elevator and updated the building’s amenities, including adding a bicycle service and storage room, lockers and showers.

“Renovations on the building are nearing completion and Avigilon expects to move in the second quarter of this year,” Henderson said. “With commercial space being in high demand in Vancouver, this will afford Avigilon the ability to sublet space as suitable for its business needs, providing additional cash.”

The property, including the building, was valued at $46.8 million last year, according to B.C. Assessment.

The building sits across the street from the CF Pacific Centre mall on Robson Street’s high-end retail strip — a burgeoning commercial area that is also home to the new Telus Garden and the upcoming Canada Post development.

Avigilon is currently operating its head office in a building on Beatty Street, according to its website. The maker of security system hardware and software also has branches in Boston, Lisbon, Singapore, Dubai, the U.K. and Italy.