Barrie, Ont.-based Georgian International is not your typical Canadian company so it should be no...

Barrie, Ont.-based Georgian International is not your typical Canadian company so it should be no surprise that its residential development, Braestone in Horseshoe Valley, stands out from the crowd. 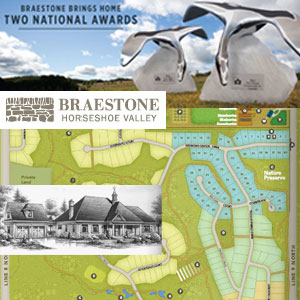 The company’s Braestone development was recently named Best New Home Community of The Year for 2016 by the Canadian Home Builders Association.  (The Braestone Discovery Centre was also named 2016 Best Low Rise Sales Office in Canada by the CHBA).

Braestone would never be confused with a cheek to jowl suburban development. Situated on 566 acres that include a working farm in Horseshoe Valley, the development offers “homesteads” on estate lots of up to 1.5 acres.

The development is targeting empty nesters attracted to a “modern interpretation of ‘country style’ design…influenced by the farmhouses, sheds and barns of the Oro-Medonte Region,” explained James Massie, president of Georgian International.

Massie runs Georgian International with long-time business partner David Bunston (the 59-year-olds have been friends since age 12). The duo has taken a patient approach to the Braestone project. They purchased the land in two transactions at the start of this century with an eye to creating a unique development that incorporated a working farm property.

“The acquisition of the working farm was really to fulfill this vision of building a community that was much different than what anybody else in the market was doing,” said Massie.

The development will feature 229 estate homes that are intended to function as a community and highlight the project’s four-season appeal. It already boasts 10 miles of trails for activities such as hiking, cross country skiing and snowshoeing.

The working farm includes the award-winning sales centre which will function long term as a community centre for Braestone residents. “It will be available to our residents to host weddings, or anniversaries, parties, celebrations and it sits on the farm and looks over the pond and the horse paddocks.”

Massie said his company is just about to deliver its first home to a buyer and expects to build at a pace of approximately 40 to 50 homes per year.

“So we think that we probably have another five years of development.”

That’s a lot for the Barrie market, but not head spinning for residents of the Toronto area just an hour’s drive away.

“The value proposition is incredible and we have had a lot of different Toronto people and Oakville people come up.”

Massie, who can track his Barrie roots back to 1929 when his WW1 veteran father came to the town, has a summer home in the area as well as his business, one of Barrie’s biggest with 600 employees and annual sales of $300 million.

Massie’s first Barrie business started in 1981 when his father helped fund the purchase of a Pontiac dealership.

“The businesses and the business that we are involved in are all tied to mine, and my partner’s, interests and really passion for building great communities, building a great airline, and having these outstanding automotive dealerships.”

Massie noted that his company came up with the homestead concept on its own.

“We really came up with it absolutely from scratch,” he said. “Since we have done it some people compared us to a couple of communities in the United States that are kind of garden to farm to table kind of communities. We didn’t have anybody to point us in that direction six or seven years ago when we were trying to unfold the plan that we are executing now.”

Massie sees the development as a more affordable and less intensive alternative for GTA residents who want a country home.

“Beyond that too, the community itself has just so many more things than living on whatever, a 10-acre piece of land on Creemore (Ont.) and being isolated versus having a community that you can be as active as you want or as isolated as you want.”

Georgian International has another Barrie-area development underway: the Windfall Blue Mountain project which features detached and semi-detached “mountain homes” from $400,000 to $500,000.

The 200 acre project envisions more than 600 homes there upon completion.

“They are basically ski in and ski out. They have similar architecture (to Braestone) but on a smaller footprint. We have a lot of skiers looking at this project as a second home and a lot of retirees looking at it as a first home.”