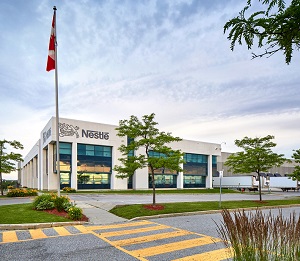 Oxford Properties and Nestlé have been awarded Gold Certification by BOMA for 9050 Airport Road in Brampton, ON. (Photo courtesy @DaleWilcoxPhoto)

“Meeting the criteria for this category was a significant accomplishment, given the age of the building and the 24/7 warehouse operation of the tenant,” said Oxford head of industrial Jeff Miller.

“Oxford is very pleased to have received this recognition, as we operate our buildings in a manner consistent with best-in-class standards. We conduct ourselves in a transparent manner and engage our shareholders, customers, employees and service providers as active partners in pursuit of higher levels of sustainability.”

The site is serviced by public transit and the tenant participates in Metrolinx’s Smart Commute program. Parking spots are designated for carpool users.

The Nestlé Building earned a BOMA BEST Gold certification in February. Oxford is looking to achieve a similar distinction across its entire existing Canadian industrial portfolio while constructing its new industrial buildings to achieve LEED certifications.

The Nestlé Building reduced its electricity use by more than 30 per cent. It uses environmentally friendly de-icing products and emissions-reducing landscaping equipment. Miller said other improvements have been made by the tenant, but he declined to specify them to respect its confidentiality.

Miller said communication is critical when it comes to the efficient operation of the Nestlé Building.

“If you involve staff in the company’s sustainability mission, it boosts their engagement. A highly engaged and productive workforce brings positive changes.”

Both the tenant and landlord are actively involved in programs designed to benefit children in the community, including the CP24 CHUM Christmas Wish, the Peel Regional Police toy drive and an annual golf tournament in support of Kids Help Phone.

“Both Oxford and our tenants take an active role in the community, given we are a major landlord in the city of Brampton and our tenants are a desirable and large employer,” said Miller.