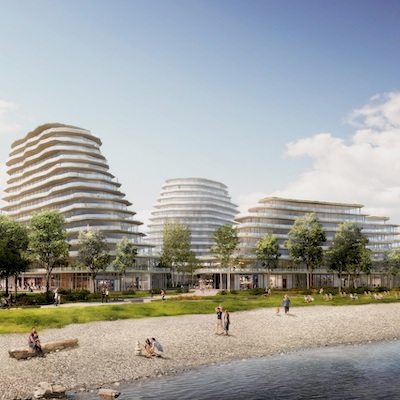 Large swathes of waterfront in mature metropolitan areas rarely become available for redevelopment anywhere in Canada. For Kilmer Group however, this “once in a lifetime opportunity” has now happened twice, both in the Greater Toronto Area.

The first property, in downtown Toronto just metres from Lake Ontario, is now known as the Canary District. This 35-acre development (a partnership with Dream Unlimited) had its start with the Athlete’s Village for the 2015 Pan American Games.

The second is Brightwater in Mississauga’s Port Credit neighbourhood. In early September, Kilmer Group and its partners announced the formal launch of Brightwater after two years of brownfields remediation and site prep.

Less than three weeks later, this 72-acre master-planned community won a local BILD Pinnacle Award for Best New Community of the Year. Brightwater had also already earned the Award of Merit for Healthy Communities from the Canadian Institute of Planners.

“It’s rare that you get to work at this scale in the urban context,” said Ken Tanenbaum, vice-chairman of Kilmer Group and chair of Port Credit West Village Partners. “It’s a remarkably sized canvas.”

Brightwater has been years in the making.

The site is the former Imperial Oil Lands, which housed an oil refinery and storage facility before being decommissioned in 1990. Mississauga city council and community stakeholder groups have been eager to make something of the site for some time.

They created a specific vision for a diverse, dynamic and self-sustaining new community – a vision that was distilled into a planning document for any development team that stepped up to the plate.

Port Credit West Village Partners has worked in close partnership with city hall and other community partners for five years to honour and further this vision, Tanenbaum said.

“It really is an extraordinary opportunity. We are delighted and feel privileged to work in Port Credit on this project.”

Located only 20 minutes from downtown Toronto by GO train, Brightwater will include 2,995 new residential units in the form of townhomes, condo towers and affordable housing.

In terms of the design aesthetic, architectural firm Giannone Petricone Associates is emphasizing what Tanenbaum calls “cohesive diversity in architecture.”

Community amenities will include over 300,000 square feet of retail, restaurants and office space, as well as a new elementary school and proposed community centre.

More than 18 acres of the site will be dedicated to parkland and open space, including a nine-acre waterfront park that will connect to the existing waterfront trail.

The site will also incorporate one of the first “bioswale” systems in Canada, in which sloped naturalized channels will be used to manage storm water flow. There is also an emphasis on healthy shoreline management.

All of this is expected to unfold over the next decade, provided all goes according to plan. The world, of course, is in the grip of a pandemic.

Tanenbaum, a self-confessed optimist, remains focused on the long term: Toronto will once again be a magnet for immigrants eager to start a new life in Canada once a vaccine becomes available. Its economy will continue to benefit from its strong professional services and high tech industries.

Nor does Tanenbaum believe the traditional office is dead.

Tanenbaum referenced his recent conversation with a bank CEO: “His chief concern was developing people and you can’t develop people remotely. You need that in-person mentorship and the creativity you get when you have human friction.”

Various studies – including one by the IBM Institute for Business Value – support the idea that for many people working from home is proving to be less than ideal.

Tanenbaum acknowledged some people may stick with new work and lifestyle habits as a consequence of the pandemic – these may necessitate some style and design adjustments in Brightwater’s residential units, such as to better facilitate home office setups.

However, he doesn’t believe there will be any wholesale shift.

The guiding vision for Brightwater will have lost none of its relevance – to create a vibrant and complete walkable community with that work-life-play balance. The kind of place where residents can find “their butcher, their baker and their candlestick maker.”

“We will have a diversity of product type that has something for everyone,” Tanenbaum said. “Port Credit will be very well-positioned for the future.”