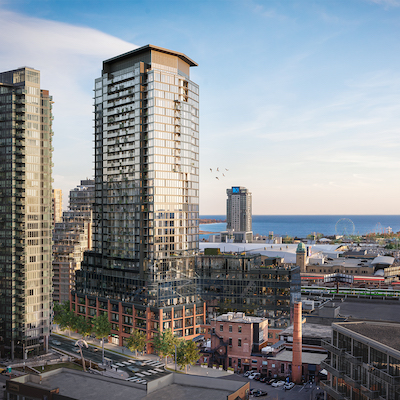 Liberty Market Tower, the third and final phase of Lifetime Developments’ 16-year redevelopment project in Toronto’s Liberty Village, is about a year away from completion.

Liberty Market Tower follows Liberty Market Building (which contains office and retail space) and Liberty Market Lofts condos on Lifetime’s six-acre site, which Lifetime principal Brian Brown has described as a “dead-end dirt road” when the project was initiated in 2004.

With its prime downtown location and extensive development during the ensuing years, the property and the neighbourhood have been transformed.

“There is easy access to everything from sports and entertainment to hospitality and premium neighbourhood amenities, all within walking distance of one another,” Brown said of Liberty Village during an email interview with RENX.

“The Liberty Village area is an area that is continuing to improve and grow every day, especially when it comes to infrastructure. This includes increased lines of transportation and the Liberty-King pedestrian bridge that is set to open this spring,” Brown said.

“We’re also excited to hear the city is going forward with the Ontario Line, meaning there’s going to be another SmartTrack line very close to Liberty Village.”

Brown believes there’s still room for more growth in Liberty Village and that the resident demographic has shifted from “a very young, one-bedroom-focused type community” to one that’s more mature and diversified.

“There’s a lot of people that moved to Liberty Village, fell in love with the neighbourhood and are now looking to upgrade because they have a child on the way,” he said. “Businesses and residents have grown with the community.

“We’ve seen larger companies such as Uber and Live Nation move into the area, signifying the area’s increasing relevance.”

The project kicked off at the Liberty Market Building.

Phase I involved restoring the exterior and reorienting the main entrance of the former industrial building, which had seen better days. It now provides 300,000 square feet of office space and 100,000 square feet of ground-floor retail space shared by 200 commercial tenants.

“The original structure on the land was built as a munitions factory in the 1940s and from the beginning we always wanted to maintain its heritage throughout our various projects,” Brown said.

It will include more than 12,000 square feet of indoor and outdoor amenity space on the eighth floor, including a fitness studio, entertaining rooms, a business centre and an outdoor dining area.

Liberty Market Tower will have seven floors of commercial space, of which WeWork will occupy three. There will also be three levels of underground parking.

Multidisciplinary artist Anthony Ricciardi has been commissioned to create murals and sculptures that will be integrated within the communal living environments.

Liberty Market Tower’s construction began in 2019 and sales started in February. The first release of units has sold out and incentives are being offered for the less-than-40 remaining units.

The top two floors of penthouses haven’t yet been made available. Occupancy is on track for the fall of 2021.

Toronto-based Lifetime has three other active developments under construction in the city.

The tower is sold-out, with two floors yet to be released. Occupancy is slated for this fall.

“We have a number of great projects in the pipeline that we’re looking forward to sharing with the city,” said Brown.

“XO2 will be coming up next to the northeast corner of King and Dufferin, which will complement our current XO Condos on the southwest corner, which launched last year.”

DiamondCorp will be a partner on the project, which would include 1,372 condo suites, 110 affordable housing units and ground-floor institutional space.

A nine-storey condo with approximately 161 units is planned for 500 Dupont St.

There are plans for a 34-storey, 456-unit, mixed-use condo project at 111 River St., near Dundas Street East. A seven-storey commercial podium is proposed.

Lifetime has proposed a 65-storey, 663-unit condo at 36 Eglinton Ave. W. It would include a five-storey podium for retail and amenity use.

It’s proposing four residential towers ranging in size from 34 to 37 storeys on a 5.8-acre site at 8200 Warden Ave., near Highway 7. There will be retail at grade.