Broccolini has unveiled new details and several modifications to the design of its Victoria sur le Parc, a 58-storey tower which will become the largest residential high-rise in Montreal when it is completed in 2020. 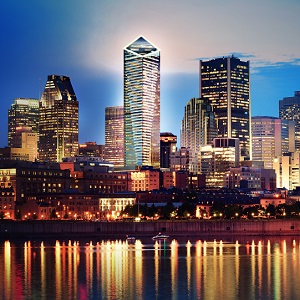 The project is Broccolini’s “most ambitious yet” the company says, and comprises one of the final elements of the redevelopment of Montreal’s International District. In a release, Broccolini says the Victoria sur le Parc will “forever change the downtown skyline as we know it.”

The Victoria sur le Parc residential tower will sit atop a 10-storey commercial podium, the 700 St-Jacques, which will include office space as well as shops and services directly accessible to the residents.

When originally announced in March (see Broccolini plans Montreal’s tallest residential tower), by Roger Plamondon, president of real estate development and acquisitions at Broccolini, the project was envisioned as 56 storeys with an eight-storey base.

The commercial component was planned to comprise about 300,000 square feet of space.

Victoria sur le Parc is part of a two-tower development at what had been an undeveloped, 135,000-square-foot site near the Tour de la Bourse (Stock Exchange Tower). Broccolini bought it from  Magil Laurentienne and Desjardins Group in January for $100 million, then quickly sold about half the site to National Bank.

That property will house the bank’s new $500-million headquarters.

The two buildings will share a 45,000-square-foot park which will be designed and landscaped by architect Claude Cormier.

Construction has already begun for Victoria sur le Parc, and sales will kick off on Oct. 20 at the 700 St-Jacques Street sales office.

Victoria sur le Parc and the 700 St-Jacques site is within walking distance of the Old Port, the financial district, downtown stores and an abundance of cafés, restaurants and terraces. A direct passage to the Underground City offers access to the Métro, to Central Station and to the future REM station.

Car-sharing services and bicycle paths are also close by, and drivers will benefit from access to Highway 720 in under five minutes.

The building’s amenities include an outdoor infinity pool, an indoor pool, saunas, and a state-of-the-art gym that includes a meditation/yoga room and terrace with views over the largest green space in the downtown core.

Services include 24/7 concierge, an owners’ lounge with a second private terrace, as well as an underground parking garage with the possibility of electric vehicle charging stations.

Broccolini and its other projects

This project joins a roster of large-scale projects built by Broccolini in the heart of Montreal, including the 628 St-Jacques and the L’Avenue project, located opposite the Bell Centre.

Broccolini is also the builder, owner and landlord of the new Maison Radio-Canada, located on the corner of René-Levesque Boulevard and Papineau Street. The construction of this new media complex is underway, and delivery is slated for 2020.

Broccolini is a single-source provider of planning, construction and management services for industrial, commercial, institutional and residential buildings. Its Real Estate Management subsidiary manages a portfolio of more than 40 properties, representing more than six million square feet of assets.