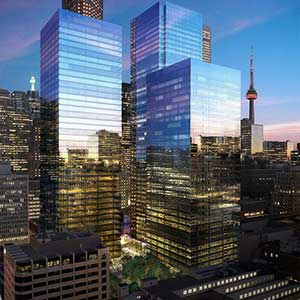 “We are pleased to commence development of the North and final tower at Bay Adelaide Centre with highly respected financial institution, Scotiabank, as the lead tenant,” said Jan Sucharda, global president and COO, office division, for Brookfield Property Partners in a release. “The North tower will complete the three million-square-foot Bay Adelaide Centre campus, which over the last decade has established itself as one of the pre-eminent business addresses in Toronto’s financial core.”

Brookfield expects the development to cost about $500 million.

Bay Adelaide Centre North, which will be on the north side of Temperance Street across from the existing East and West towers, will be a 32-storey, 820,000-square-foot office building with best-in-class operational, environmental and life-safety systems.

Scotiabank will have a dedicated reception area, and exclusive access to an outdoor podium terrace.

The tower will overlook Arnell Plaza to the south, a half-acre open space, as well as Cloud Gardens Park to the east. It will have direct access to subways and the amenities of the downtown Toronto PATH underground pedestrian system.

Brookfield anticipates completion of the building in early 2022.

Earlier this year, Brookfield sold a 50 per cent interest in the West and East towers to VPMA Bay Adelaide Property Ltd., for $850 million, according to reports at the time.

The North tower (not part of that transaction) the latest of several major downtown Toronto office developments which will begin to deliver new space into the market in another 18 months or so. The space is needed to bolster the 79 million-square-foot downtown inventory, as vacancy rates for downtown office space have been dropping for several years and currently hover around two per cent.

Among the other major projects in various stages of development are:

* 16 York: One of two major projects by Cadillac Fairview, this 33-storey, 878,ooo-square-foot office tower is projected to cost $479 million. CF CEO John Sullivan told RENX in June the project is more than 50 per cent leased. It is slated for completion in 2020.

* 160 Front Street West: The second CF project, this 1.2-million square foot office development will stand 46 storeys. Construction is to begin in January, and the anchor tenant will be CF’s owner, the Ontario Teachers’ Pension Plan.

* 81 Bay CIBC Square: Developed by Ivanhoe Cambridge, CIBC Square will deliver 1.5 million square feet into the downtown with the completion of the first 49-storey tower in 2020. A second, 1.4 million-square-foot tower is slated for delivery in 2023.

* The Well at Front and Spadina Streets: Allied Properties REIT (AP-UN-T) and RioCan REIT (REI-UN-T) are teaming up on this mixed-use project, which features a million square feet of office space plus 425,000 square feet of retail and 1,800 residential units (rentals and condos). The office component is more than 30 per cent leased.

The 52-storey, 1.2 million-square-foot Bay Adelaide Centre West opened in 2009 and is 100 per cent leased. At the time it was developed, it was the first new office tower in Toronto’s financial core in 17 years.

The 44-storey, one million-square-foot Bay Adelaide Centre East opened in 2015 and is also 100 per cent leased.

Reflective of the strength of the market and quality of its assets in the city, Brookfield says its 11-property, 11 million-square-foot Toronto office portfolio is currently 99 per cent occupied.

Brookfield Property Partners is one of the world’s largest commercial real estate companies, with approximately $69 billion in total assets.

It is a leading owner, operator and investor in commercial real estate, with a diversified portfolio of office and retail assets, as well as interests in multi-family, triple net lease, industrial, hospitality, self-storage, student housing and manufactured housing assets.

Brookfield Property Partners is listed on the Nasdaq stock market and the Toronto stock exchange.