Look to see more announcements from BTB REIT in 2017. 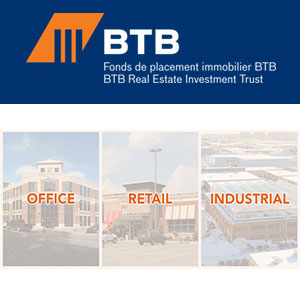 The Montreal-based trust (BTB.UN-T) had a quiet 2016, focusing on internal housekeeping such as reducing its debt level and shaving its borrowing costs.

Its biggest deal of the year didn’t even involve buying or selling assets, coming in the form of a $33-million share offering in June.

Still, BTB president and chief executive Michel Leonard sees the past year as a success.

“It was a good year, not a great year. Our results are better than the previous year,” Leonard said. “Although there hasn’t been significant acquisitions, I think that overall we managed to reduce our debt level by doing a redemption of debentures prior to maturity.”

The big news for the mixed-asset REIT is a go-ahead from the board to revamp the mix of properties this year. Currently BTB owns 72 properties serving retail, office and industrial users.

The trust’s new strategy can be summed up as “bigger and better located.”

“There are some properties we are going to put up for sale, either because they don’t fit our core properties anymore, so they are basically non-core, also probably markets that we don’t want to be in anymore,” said Leonard.

Has outgrown some of its properties

BTB, in other words, has outgrown some of its properties. Today, it has 5.1 million in leasable square feet, $658 million in assets and $189 million in market capitalization.

“We can afford to buy larger properties,” says the REIT chief. “For us to manage an office property that is 12,000 square feet, it is the same time and effort as one that is 50,000 square feet.”

The trust has identified 10 properties it hopes to sell and another 10 properties for sale in the following year. The shopping list for new properties has four major markets in mind: Montreal, Quebec City, Ottawa and “a foray” into suburban Toronto.

BTB does own an industrial property in London, Ont., but currently nothing in the GTA.

For the year ended Dec. 31, 2016, BTB reported a slight decrease in net income from its same-property portfolio, a reduction in its total debt ratio and the average interest rate on mortgage debt.

Over the year, more than 520,000 square feet of leases were renewed and new leases signed during the year with a 5.6% increase in the average rental rate of renewed leases during the year.

These refinancings allowed for an equity take-out of approximately $16 million.

* (i) to grow its revenues from its assets to increase distributable income and therefore fund distributions;
* (ii) to maximize the value of its assets by “dynamic management of its properties” to sustain the long-term value of its units;
* (iii) to generate cash distributions that are fiscally beneficial to unitholders.