A “strategic repositioning” during which BTB REIT (BTB.UN-T) is selling smaller, underperforming properties and buying larger, better performing assets is paying off, says its president and CEO Michel Léonard. 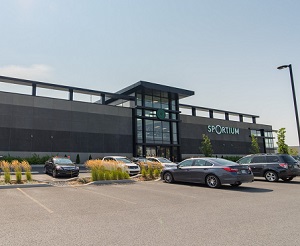 Sportium is among the tenants of a retail power centre on F.X. Sabourin Blvd. in St. Hubert, on the South Shore of Montreal, purchased recently by BTB REIT. (Image courtesy BTB REIT)

The REIT is “definitely on track” in transforming its portfolio, he told stock analysts in a conference call marking the release of BTB’s financial results for the third quarter ended Sept. 30. As part of its strategy, BTB is selling smaller properties and has acquired several larger, more lucrative properties.

“Every time an analyst or an investment banker tours our properties, they’re always surprised to see the quality of our portfolio,” says Léonard. “Unbeknownst to us, sometimes people feel that our portfolio is less than desirable.

Noting that BTB has a “healthy pipeline on the acquisition front,” Léonard says the REIT is close to finalizing a $35-million purchase of two class-A properties in the Montreal borough of St. Laurent.

Developed in the early 2000s, the properties, which Léonard said he could not publicly identify, are 98 per cent leased. The purchase will be concluded at a cap rate of seven per cent and the properties will generate a combined net operating income of more than $2.5 million.

“As far as improving the overall aspect of our portfolio, they will contribute very well,” he says.

BTB now owns 71 retail, office and industrial properties with a total leasable area of more than 5.3 million square feet and asset value of about $715 million.

That has been bolstered by a couple of other significant recent acquisitions.

Last week, the REIT announced it had acquired the Carrefour Saint-Romuald retail power centre in Lévis, near Quebec City, for $35.9 million.

Carrefour Saint-Romuald, which welcomed its first tenants last year, is located next to a Costco and has about 121,000 square feet of leasable space. It houses retailers such as Michaels, Bulk Barn, Archambault and Mondou. About 1,500 square feet are unoccupied but are in the process of being leased.

The centre has a net operating income of more than $2.4 million and a cap rate of 6.8 per cent. It was financed with a 10-year, $23.2 million mortgage at 3.88 per cent interest. The balance of the purchase price was paid from surplus cash and BTB’s acquisition line of credit.

BTB also bought a commercial property on F.X. Sabourin Blvd. in St. Hubert, on the South Shore of Montreal, for $23.2 million. The property is expected to generate $1.7 million annually in net operating income.

BTB has so far this year sold properties in Laval, Trois-Rivières and Dollard-des-Ormeaux in Montreal’s West Island for about $11.5 million. BTB had budgeted a net operating income of $590,000 for the three properties in fiscal 2017.

“Overall, I think that our business is really achieving and looking at the right elements in order to evolve,” Léonard says, by getting “even better products than we have owned in the past.”

During the third quarter, BTB’s occupancy rate increased 1.4 per cent to 90 per cent, compared to the second quarter. New tenants leased 131,000 square feet during the quarter.

“We are working extremely hard on the leasing front,” he says.

For the cumulative nine month period, average rates increased 7.67 per cent versus 4.21 per cent in 2016.

According to The Globe and Mail, BTB shares have gained 3.13 per cent this year but have underperformed the S&P TSX (BTB.UN) by 5.41 per cent during that period. Of the three analysts surveyed by Reuters Estimates who cover BTB, the consensus rating is a hold.