With two major office projects which will deliver more than two million square feet of space to the market, Cadillac Fairview CEO John Sullivan says his company is “all-in” for downtown Toronto. 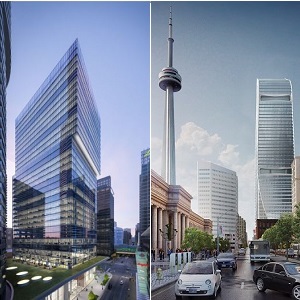 “We’re excited,” he told RENX in an interview Wednesday. “We’ve got two very large developments going on in downtown Toronto and we’ve got 10 million square feet here already. So we’re all-in for Toronto.”

Sullivan was speaking just a few hours after announcing CF’s latest downtown development, a 46-storey office tower at 160 Front Street West in conjunction with Investment Management Corporation of Ontario. When shovels go into the ground in January, it will be Cadillac Fairview’s second major office tower to begin construction in just over a year.

CF is already building the 33-storey 16 York just a few city blocks away.

The $800-million Front St. tower includes 1.2 million square feet of office space, while 16 York contains about 878,000 square feet. It was projected to cost about $479 million.

The most recent figures peg Toronto’s downtown office availability rate at a very tight 2.4 per cent (via Cushman & Wakefield). Any existing significant office projects which will be delivered prior to 2020 are already up to 90 per cent preleased, leading most observers to predict at least two more years of limited availability.

Sullivan said the ongoing restriction in the downtown Toronto market dictated the timing of 16 York and 160 Front St., which are both premium projects. Plans for the Front St. tower were actually filed with the city about four years ago, so CF faced a decision back in 2016 on which project to proceed with first.

“At that moment in time, we had both projects ready to go and we decided to go ahead with 16 York. If you recall, we went ahead without any preleasing,” Sullivan said. “16 York is the smaller of the two projects, so that was a conscious decision.

“We are a year into it right now and if you go by the site I think we are on the third floor right now, coming out of the ground. We’ve had an enormous amount of interest and a lot of success in preleasing there.”

First National Financial will be one of the anchors at 16 York, he said, and one other key tenant is also signed, though Sullivan said that deal remains confidential.

“We have a few other ones that are about to be signed, such that we will be well in excess of half leased in a short period of time,” he said. “(Leasing) has gone extremely well. We’re not even going to be finished this building until 2020. And the new one we’re not going to finish until 2022.”

At 160 Front, meanwhile, the Ontario Teachers’ Pension Plan was announced as the first anchor tenant. The OTPP, which also owns CF, will take nine floors of the tower, or about 21 per cent of the total office space, Sullivan said.

Although there are no other firm commitments at this point, Sullivan said there has been strong interest in the project during its planning stages.

“It would be safe to say we’ve had discussions with a number of larger tenants. At this stage we are not interested in renting one floor, we’re looking at a much larger space,” he explained. “There is lots of interest. To be frank a number of them were waiting to see if we were going ahead with it. Now that we are, I think those discussions will accelerate.”

He said there are several major factors driving the Toronto office boom, and none of his “top three” show any signs of slowing down.

“You also have the technology space. An enormous amount of growth. You have tenants that start out with one floor and five years later they are 10 floors. You have a massive amount of growth in that space and they all want to be downtown.

“Finally, the one which has been really a bellwether for Toronto over the years is the financial services sector. They continue to grow.

“So when you put those three together alone, I think they are responsible for a large part of the strong market which you see today.”

With the addition of 160 Front, the 79-million square foot downtown Toronto office market will see a significant addition of new, premium space from 2020-2023.

The delivery times for these two towers are similar to another massive downtown project, the 81 Bay CIBC Square development by Ivanhoe Cambridge. That will deliver 1.5-million square feet into the downtown with the completion of the first 49-storey tower in 2020, and a second, 1.4-million square foot tower is slated for delivery in 2023.

Like those competing towers, both CF buildings are being constructed to meet LEED Platinum and WELL certification requirements. Sullivan trumpeted Cadillac Fairview’s ongoing sustainability and wellness programs and commitments throughout its portfolio, and said both projects will echo that philosophy.

Although the exterior of 160 Front might be very similar to the design presented in plans filed four years ago at city hall, the interior will be anything but.

“Technologically every year that goes by we improve that. So as we sit here today the technology that will be implemented at this project will be state of the art,” Sullivan said.

“We’re leaders in that (sustainability) space and we’ve also been a leader in our Green at Work program, which is the whole sustainability side, which kind of overlaps both WELL and LEED. This (building) will be a key part of that program.”