For decades, the Battle of Alberta has been fought within the sports realm. 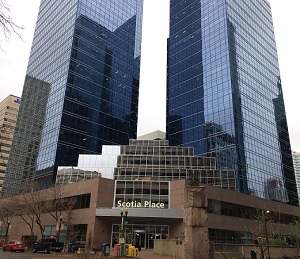 Whether it was the Edmonton Oilers versus the Calgary Flames in the National Hockey League or the Edmonton Eskimos and the Calgary Stampeders in the Canadian Football League, the rivalry has always been intense.

There’s also a rivalry that has developed in recent years in the commercial real estate world – a friendly one which sees the cities compete for investors in all aspects of the market.

However, Ben Tatterton, Data Solutions manager for the research firm Altus Group, said the two cities are this year following a similar path of growth in investments.

“It should be noted that the main source of this interest is from private investors, who are capitalizing on a marketplace that has less competition from institutional investors,” Tatterton explained.

“There is a lot of interest from private investors that are maybe capitalizing on some deals that they might have been priced out of the market previously for. We’re seeing a lot of transaction volume in Calgary. . . .

“I think in general the sense of the economy is that there is sustained interest.”

Here are some highlights of the Calgary report:

* Retail recorded $149 million in investment, up 43 per cent from the first quarter and up 85 per cent from a year ago. There were 25 transactions which is the highest ever, surpassing 23 in the fourth quarter of 2014;

* $166 million was invested in ICI land in 45 transactions – a 15 per cent quarterly increase and a 79 per cent annual increase;

* The residential land sector had 15 transactions worth $122 million – declining by 43 per cent from the previous quarter but up 28 per cent year-over-year.

Altus said the apartment and industrial sectors led the way in Q2, together contributing $694 million in transaction value representing 60 per cent of the overall market. Retail rounded out the top three, recording $236 million, or 21 per cent of the total investment in the quarter.

Edmonton highlights of the Altus report include:

* A large apartment portfolio transaction, which was agreed upon in November 2017, closed in the second quarter. The acquisition of five properties comprising 775 seniors home units by Chartwell Retirement Residences (CSH-UN-T) at a price of $298 million accounted for three-quarters of the $393 million in investment activity for the sector;

* Retail had 43 transactions worth $236 million which was the second biggest quarter on record since Altus Group began tracking the Edmonton market area in 2013. That was up 14 per cent on a quarterly basis and a 43 per cent hike from last year;

* The industrial sector also had its biggest quarter on record since Altus Group began tracking the Edmonton market area with 64 transactions and a value of $301 million. That was up 53 per cent from the previous quarter and a 51 increase from a year ago. The largest transaction was the Sunwapta Business Centre, a three building, 415,557-square-foot complex sold for $62.9 million to Fiera Properties;

“While a significant portion of the Q2 commercial investment total was attributed to a deal that occurred in late 2017, the high number of transactions noted this quarter is indicative of strong private investor interest and activity in Edmonton,” said Tatterton.

“There’s a feeling that there’s deals to be had in Edmonton and a lot of the private investor segment of the market is moving on them.”

Long-term confidence in both Alberta cities

Tatterton said investors are expressing long-term confidence in the Edmonton market just like in Calgary.

“Deal counts are on the rise whereas total investment dollars between them has been a little bit moreso on the fluctuating side ever since 2014. You kind of have an up quarter, then a down quarter and so forth,” said Tatterton.

“But transaction numbers have been growing so I think that just shows there’s a little less competition from maybe big institutional investors and that shows there’s opportunities for others to move in and buy.

“It certainly indicates that the interest is still there.”