Nailing down just how much cultivation and production space Canada’s cannabis industry is going t...

Nailing down just how much cultivation and production space Canada’s cannabis industry is going to need is like trying to hit a moving target. 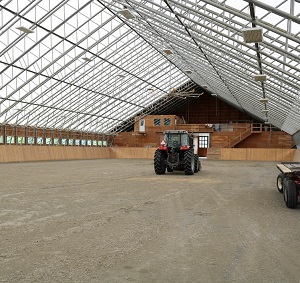 At the latest check, there were 113 licenses for marijuana cultivation operations in the country, according to Health Canada. Sixty-one of those licenses are in Ontario, 24 in B.C. and the rest are spread throughout the other provinces.

But that could be just the tip of the iceberg, so to speak; more than 500 additional marijuana cultivation license applications are under review by the Canadian government as the Oct. 17 dates looms for legalization.

That number could rise, depending on how supply and demand unfolds, said Dan Rowland, a Denver-based cannabis industry consultant who tracks the sector across the continent.

Part I of a two-part Special Report: Thursday, we’ll focus on the retail implications of Canada’s cannabis boom

“The number of applicants to cultivate cannabis in Canada rose 150 per cent in the first quarter of 2018 as the industry ramps up for legal sales,” said Rowland, who has been engaged full-time with Calgary’s 420 Advisory Management.

“There are now over 500 applications in the pipeline, on top of the current 109 producers. They’re all cranking away and expanding.”

How much space will they need?

Commercial property firm JLL estimates Canada’s eight largest cannabis companies alone will require more than eight million square feet of industrial space for cultivation within in the next two years, not including logistics and distribution centres. Nor does that figure include farmland for outdoor grows.

Alberta is already rising to the top of favoured production locations, Rowland said.

“Alberta .  . .  is very attractive to potential licensed producers because you’ve got low energy costs,” he said, noting ample sunshine in Southern Alberta is a key factor.

He said the province is also “generally a business-friendly environment” leaning heavily toward a private model as the provinces unfold their various regulatory regimes.

Other factors for producers to consider when selecting a market are distribution costs, access to customers and access to talent, he said.

He sums it up this way: “B.C. has a lot of talent, Ontario has a lot of people, but Alberta has the business-friendly . . . environment. And lots of space.”

Those who opt to grow their crops outdoors will also be gobbling up a lot of farmland.

B.C.-based grower Bluevault is preparing to grow cannabis on a 135-acre organic farm in Pemberton. Martin Mullany, who owns the company and the land, will produce CBD oil extract from his crops for the medicinal market.

His crop will be grown outdoors, then processed in a barn on the property which used to house a horseback-riding business.

“My focus really is more on the CBD side, not the THC side,” he said, discussing the two main chemical compounds found in cannabis. THC produces the “high” or intoxication, while CBD is valued for therapeutic uses.

“Cannabis has a million-and-one medical benefits (but) when you speak to politicians, they’re always thinking about cannabis as something that’s going to get people high.”

Mullany figures he’s “bucking the trend” by growing his crop outdoors. Over the centuries, cannabis has always flourished outdoors, he said. “My view is we should we growing it as an outdoor crop.”

The cultivation and production market is clearly shifting, Rowland said. “Where it was once completely dominated by indoor and warehouse (grow operations), you’re starting to see much more investment in greenhouses. Outdoor (grows) remain the smallest piece overall.”

Rowland estimated at least half of all grows are indoor.

“Greenhouse is probably sneaking toward 30 per cent, with outdoor around 20 per cent,” he said. “Many outfits now employ multiple growing methods and techniques and even multiple facilities. Some companies are utilizing all three methods.”

In Canada, there are several Canadian born-and-bred companies taking a stronghold on the burgeoning industry, Rowland said, listing companies like Tweed, Canopy Growth, Aurora, Tilray and Sundial Growers, among others.

“What’s happening, as you would expect, is they are partnering and taking investment from other places, most notably the U.S. and from Europe as well,” he said. “These companies are becoming massive publicly traded firms that are traded in the Canadian stock exchange but also in the U.S., so they have access to capital to fund their vision.

“Many of these have big visions.”

Consolidation is already happening: “That’s interesting because we haven’t even sold a single joint of recreational cannabis yet, but some of these firms got really big and are partnering with other groups.”

“Not every producer is going to succeed”

“I do wonder what becomes of these places when they’re no longer viable,” Rowland said. “What if the business fails? We worry about oversupply and contraction in the market. That will happen.”

But those are issues every business sector faces, no matter the industry, he added.

Landlords are now starting to shed the stigma which persisted through the legalization of medical pot, said Alan Johnson, vice-president, unique properties with Colliers International in Vancouver.

“Some landlords said ‘absolutely not. We’re not allowing a cannabis facility into one of our buildings’,” he said. Part of the reason is that some landlords felt they were dealing with people who used to be associated with the industry when it was illegal, “but that’s changing.”

One persistent concern is fear about travelling to the U.S., where federal laws continue to prohibit cannabis use even as many states have legalized it in some form – either for therapeutic uses or, in some cases, recreational possession.

“I think that probably has a lot to do with it,” Johnson said. “Certainly, those thoughts have crossed my mind,” he said, though he has nothing to do with the industry directly. “People didn’t realize which way it was going to turn and how quickly this industry has turned, and how many people are getting involved.

The only certainty right now is that as the sector evolves, it’s going to change, Rowland said.

“It’s such a new industry and the people who are making the laws and enforcing the regulations around this don’t know what they don’t know yet,” he said.

“We’re going to learn a whole lot in these first few years and legislative changes will come about because of that.”