GUEST SUBMISSION: In a prior blog in mid-May 2020 during the first phase of the COVID-19 pandemic...

GUEST SUBMISSION: In a prior blog in mid-May 2020 during the first phase of the COVID-19 pandemic – the period that will be known as “The Great Lockdown” in the history books – I mentioned that economic downturns typically breed a burgeoning sublet market in the commercial real estate sector.

But we can all agree this downturn is like no other, and the outcome is unpredictable.

Now, some 15 months into the pandemic, there is a sense of optimism that Canada is poised to recover strongly once vaccinations reach a critical mass – leading to a widespread reopening of many offices in fall 2021 or early 2022.

Since the onset of the pandemic in early March 2020, millions of Canadians transitioned to working from home and the fate of the corporate workplace has been the subject of significant debate as positive experiences of home working contrast with organizations and individuals eager to get back to collaborating in person.

If there is one clear message from the multitude of surveys conducted across industry types about workers and the future of their work, it is that they want the best of both worlds – the flexibility to work from anywhere and a place to gather with their colleagues.

Perspective on the current sublet market

Meanwhile, during this hiatus from the physical office and ongoing debate as to what the post-pandemic workplace will look like, companies of all sizes and industry types have flooded the market with millions of square feet of sublease space – some the result of direct or indirect financial hardship, others the result of weighing the options of a hybrid work environment.

The pros and cons of subletting space were addressed in a prior blog which took a deep dive into the sublet market scene in Toronto. This time, I want to put the current sublet market into perspective, relative to prior downturns. 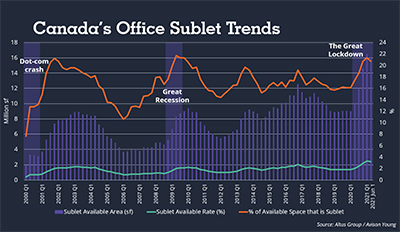 Not surprisingly, available sublet space is up significantly on a year-over-year basis for Canada’s six major office markets (Vancouver, Edmonton, Calgary, Ottawa, Toronto and Montreal) and their respective downtowns, collectively.

Notwithstanding the sharp increase during this period and with one month till the end of Q2 2021, it appears the national sublet pipeline might be starting to turn the corner.

Since the end of March, available sublet space has receded by more than 375,000 square feet to 16.1 msf – either through lease transactions, companies removing sublet space from the market as their plans become clearer, or as sublet terms have expired.

Sublet space as a percentage of total available space also declined, reaching 20.7 per cent as of June 1.

While available sublease space as a percentage of total available space has increased substantially in Canada and threatens to surpass prior peaks, the change in the nation’s sublet availability rate has been less dramatic – rising to 3.3 per cent at the start of June from 1.8 per cent in Q1 2020.

Thus, while the absolute amount of square footage is higher this time around, the proportion of total available space made up by sublets is similar to previous downturns.

More questions than answers, for now

The comparison leads to some interesting questions.

Canada recovered well from both earlier downturns – however, these were caused by an over-exuberance for space and economic circumstances. This time around, the downturn is driven by a public health crisis and its economic fallout.

Does that mean the market will recover more quickly this time, given the different nature of the crisis?

Or will the ongoing public health aspects of the pandemic, coupled with the biggest-ever work-from-home experiment, result in a fundamental shift in how office space is used going forward – impacting demand in the market in the long term?

Some other highlights that emerged from this analysis include:

– Toronto is home to the largest amount of sublet space (7.4 msf / 46 per cent of the national total);

– Calgary has the highest overall sublet availability rate, at five per cent;

– The country’s six major downtown markets account for 8.9 msf – more than half (55 per cent) of the available sublet inventory;

– Toronto’s downtown market accounts for 37 per cent of that downtown available total;

– Calgary’s downtown sublet availability rate is the highest at 6.2 per cent – higher than the national downtown average rate of 3.8 per cent;

– Among downtown markets, Vancouver and Toronto tied for the most sublease space as a percentage of total available space, at 33 per cent.

Lately, we have heard anecdotally that with a return to office likely in late 2021 / early 2022 in most Canadian markets, some occupiers have withdrawn sublet space from the market, in part or altogether.

This appears to be happening in multiple markets across the country, with some examples from my own home market of Toronto including spaces that had been listed for sublet by TMX (removed from the market), TouchBistro (leased to Pinterest) and Intelex (which has removed two of the three floors it had been marketing for sublet) – to name a few.

While this is great news, resulting in a bending of the Canadian “sublet curve,” there is still no clarity in terms of what the end results will be for the market.

It’s encouraging that some companies are feeling the confidence to remove their spaces from the market. However, the question remains whether larger occupiers, many of whom have yet to test the sublet market at all, could give back big blocks of space down the road as they finalize their workplace strategies.

Some recent headlines involving companies with a significant office footprint in Canada include:

– Up to 80 per cent of IBM employees globally will shift to a hybrid work model and up to 20 per cent to permanent remote work, while the company plans to close 70 msf of office space and redesign its remaining offices to promote employee collaboration;

– Google expects 20 per cent of its workers to remain on remote work after its offices re-open, while 60 per cent will be on a hybrid schedule;

– Sun Life won’t return to face-to-face work five days a week and will instead leave decisions about office and remote time up to employees and their managers. The company was already moving toward a more flexible work environment and targeting a 15 per cent reduction in office space across North America before the pandemic.

Similar moves by other large occupiers could have a material impact on office space demand. On the other hand, some companies may be required to keep the same amount of space in order to provide a smaller number of staff with the ability to social distance.

It will be interesting to monitor how this plays out across the country over the next year or so.

Bill Argeropoulos is an Avison Young principal and the firm’s Canadian research practice leader. He is based in the company’s global headquarters in Toronto.

Distressed assets in the GTA? Not yet…

Will the GTA multiresidential market be impacted by an ‘urban exodus’?

Microsoft buying GTA land and retail? What’s up with that?

Bill Argeropoulos Bill Argeropoulos, Principal & Practice Leader, Research (Canada), Avison Young
Website: http://www.avisonyoung.com With 33 years of experience in the commercial real estate research field, Bill is highly respected amongst his peers and is one of Canada’s leading market research analysts, often quoted in the media. Bill joined Avison Young in 2009 and became a Principal of the firm in 2015 with the title of Practice Leader, Research (Canada). Bill is also part of the Global Research Leadership team and a recipient of Avison Young's Circle of Excellence Award. Bill takes an active role in establishing best practices, ensuring data integrity, developing commercial real estate technical reporting and leveraging the scope of research to help support Avison Young’s clients across all business lines.