While traditional manufacturing may be declining in Canada, increases in distribution, logistics and e-commerce activity have enabled the industrial market to remain the darling of the commercial property sector. 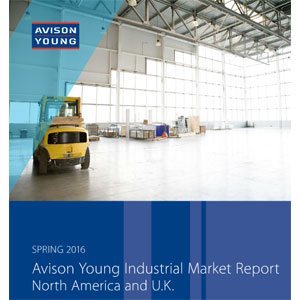 “From a national perspective, we are in pretty good standing,” said Bill Argeropoulos, principal and practice leader, research (Canada) for Avison Young, which just released its “Spring 2016 North American and U.K. Industrial Market Report” that included coverage of 11 Canadian cities for the year ended March 31.

“It continues to exhibit stable to improving demand and has a pretty consistent supply pipeline. Vacancy rates remain in single-digit territory apart from Halifax, which is in double digits. Rental rates for the most part are stable to rising.”

Canada has nearly two billion square feet of industrial inventory and finished the first quarter with a vacancy rate of four per cent, down 50 basis points from the same period a year earlier.

Low energy costs and interest rates, along with a competitive Canadian dollar and a growing American economy, have fuelled exports and helped the industrial real estate market.

Twelve-month absorption was almost 25 million square feet, nearly double the total for the previous 12-month period. The Greater Toronto Area (GTA) accounted for just over half of that. Developers have completed almost 16 million square feet of new industrial space in the past year, with about three-quarters of it in the GTA, Edmonton and Metro Vancouver.

More than 10 million square feet of product is under construction. The vast majority is being built without pre-lease commitments and 75 per cent of it is sprouting up in the GTA and Metro Vancouver.

The majority of American markets in the report had decreased vacancy rates, while rates dropped in just five of the 11 Canadian markets monitored — although they were already starting from a relatively low base.

“The American markets have come down from nearly double digits,” said Argeropoulos.

Rising costs of what little industrial land is available has pushed up average net rents to $9.07 per square foot. Vancouver is somewhat unique in that its film and television production sector is boosting demand for industrial space.

Regina and the Alberta cities of Calgary, Edmonton and Lethbridge have all suffered setbacks as a result of low oil and gas prices. Argeropoulos believes the markets are sufficiently diversified to weather the storm and points out that Calgary’s location makes it a major distribution hub for both rail and trucking transportation within Canada and to the United States.

“The western markets continue to command higher asking rental rates for industrial product at around nine dollars per square foot versus the east, which is $6.89,” he said. “There continues to be a price differential despite the woes imposed by the oil and gas sectors.”

Waterloo Region and the GTA

Sites under construction are primarily small bay, multi-tenant facilities and freestanding properties of less than 100,000 square feet being used by manufacturers, warehouse and distribution companies, and technology firms converting some to flex space with higher percentages of offices.

“Any sort of warehouse facility that’s close to an urban area is very sought-after by people involved in the industrial sector,” said Argeropoulos.

“Some of those opportunities are hard to find and aren’t made available. But when they are, they’re being bought for high prices and are being razed and converted to new distribution facilities that meet today’s demands.”

The GTA continued to experience record industrial growth, as high demand from domestic and foreign companies in the logistics and retail industries is pushing availability and vacancies to historic lows. Investor demand is only being restrained by a shortage of available product.

“The only caveat for the Toronto market is that we have been building quite a bit of space because we had gone through a lull where we hadn’t built any space at all, and the development community is trying to keep pace or in some cases be ahead of demand,” said Argeropoulos.

“If this demand slows a bit, we have some sub-markets that may encounter some oversupply as this product is delivered.”

Activity for small transactions of 1,000 to 3,000 square feet remained stable in Ottawa, while larger deals with spaces in excess of 15,000 square feet have been more challenging to complete.

The Greater Montreal Area (GMA) has 350 million square feet of industrial inventory and its position as a hub for road, rail, water and air transportation make it an excellent location for goods shipment.

The year-over-year vacancy rate dropped to 5.6 per cent from 6.6 per cent as 721,000 square feet of new supply was added and 288,000 more was under construction. There are 26 announced projects totalling 2.2 million square feet scheduled for the GMA, largely focused in Laval.

Halifax, Atlantic Canada’s economic hub, had a vacancy rate of 11.9 per cent — which is more typical of office than the industrial sector.

Argeropoulos expects the struggling market to pick up as the Halifax shipyard moves into full production under a federal naval shipbuilding contract, “but it won’t be an overnight sort of turnaround.”