E-commerce giant Amazon is leasing an additional 100,000-square-foot building in the heart of Ott... 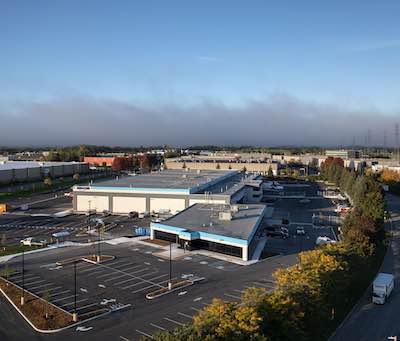 Canadian Urban has leased this 100,000-square-foot warehouse in Ottawa to Amazon for use as a local distribution centre. (Courtesy Canadian Urban)

E-commerce giant Amazon is leasing an additional 100,000-square-foot building in the heart of Ottawa’s Hawthorne Industrial Park to serve as its delivery station facility for the region. It also nudges Amazon’s occupied space in the National Capital Region to about four million square feet.

The Hawthorne facility will create about 100 new full-time jobs and include contemporary robotics technology, inventory and shipping operations, adding another state-of-the-art logistics facility in the Ottawa region.

Sorab Gill, assistant vice-president of asset management for Edmonton-based Canadian Urban, said the company invested months into this deal, which included executing an early lease surrender with a previous tenant.

“Considerable capital improvements were completed at this property, positioning it to become a state-of-the-art facility servicing the Ottawa market,” Gill told RENX.

Jay Hamilton, the president of Canadian Urban, said the company has a strong industrial presence in growth markets.

“We expect the industrial property sector to continue to be buoyant in this market, particularly those assets that meet the needs of logistics-focused organizations. This transaction highlights Canadian Urban’s proven ability to add value, with the aim of delivering superior risk-adjusted returns for our investors,” he said.

The property features a low site coverage ratio of 23 per cent.

“That was followed by a significant interior improvement to the site which included brand new electrical systems, mechanical systems. Other building systems were upgraded as well and replaced with new systems throughout.”

Work was done to the roof, new staff offices were constructed, exterior paint and stucco was completed, along with full landscaping with new trees and shrubs. A large structural retaining wall was also installed to add parking to the site.

Also, 2.5 acres of excess land was improved and fully paved with both drive-on access and drive-through access in the warehouse which allows trucks to enter, load and leave.

Canadian Urban has managed the property since January 2009. It is a single building with a small office structure as well.

Since the property was acquired, it had been fully occupied by the original tenant, Summit Foods. However, the company announced in February 2020 it was closing two of its Ontario distribution centres – including Ottawa – due to the loss of a service contract.

“There was never an intention of them renewing (the existing lease),” Gill said. “It was about timing.”

Sean Demsky, senior vice-president, investments for Canadian Urban, said the building is in a strategic position within the market. A 10-minute radius provides access to a major portion of the city and its major transportation networks.

“It’s extremely rare that you can find a site in Ottawa that’s located where this is located – centrally located – and have the amount of site coverage that we have. So really, this was a perfect fit for the needs of Amazon and this happened to come up at the right time,” he said.

“It’s a fantastic win for Ottawa, for that area, and it’s a great example of reusing an older building. It was built in 1993, so it’s not that old, but (we’re) reusing the existing infrastructure and making a better use for it.”

In addition to its Edmonton headquarters, Canadian Urban also has an office in Toronto. The company is celebrating its 50th anniversary this year. It manages about $1 billion in real estate from Vancouver to Halifax and also offers property management services.

It predominantly manages assets on behalf of institutions and institutional capital.

Hamilton said the company manages about 65 properties across the country in all asset classes. It’s a diversified real estate manager but over recent years it has moved to about 70 per cent industrial.

He said Canadian Urban has launched a fund for investors with a niche in small- to mid-sized real estate with a diversified strategy across all real estate sectors.

According to the 2021 Amazon Canada Impact Report, the company employs 39,500 Canadians.

“We are excited to continue our growth in Ontario with a new delivery station in Ottawa. This new delivery station will allow us to provide fast and efficient delivery for customers and creates approximately 100 job opportunities for the talented local workforce,” said Amazon Canada last-mile logistics operations regional director Jasmin Begagic, in a statement.

Nearly 2.7 million square feet of positive absorption was recorded in the quarter – attributed to the opening of another huge Amazon facility.

Broccolini constructed the multi-level, 2.8 million-square-foot building, the largest fulfillment centre ever built in the country, for Amazon in the CitiGate Corporate Business Park.

“The facility is a small parcel e-commerce distribution centre located at 222 CitiGate Drive and was built in response to the rapid increase in demand from online shopping particularly since the onset of the pandemic.

“E-commerce users have combined for about four million square feet occupancy growth since 2019.”

Amazon also occupies another major distribution centre in the city’s East End. The facility, just over a million square feet, has been in operation for about two years.

Mario Toneguzzi Commercial Development National Dec. 9 2021
M
Mario Toneguzzi Business reporter
Mario Toneguzzi, based in Calgary has 37 years of experience as a daily newspaper writer, columnist and editor. He worked for 35 years at the Calgary Herald covering sports, crime, politics, health, city and breaking news, and business. For 12 years as a business writer, his main beats were commercial and residential real estate, retail, small business and general economic news. He nows works on his own as a freelance writer and consultant in communications and media relations/training.