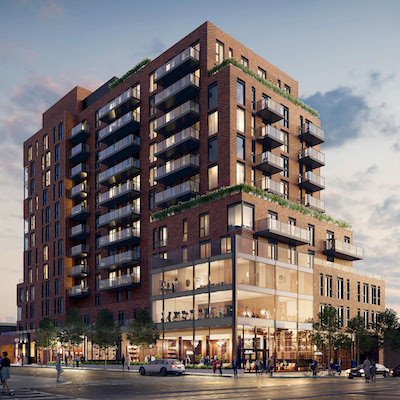 St. Clair Village is a new development in Toronto by Canderel and its partner KingSett. (Courtesy Canderel)

“900 St. Clair West will be the first of a collection of mid-rise buildings that will make up St. Clair Village, so our focus is about contributing to a long-term vision for the neighbourhood,” said Canderel residential group development director James Deitcher. “There are few projects in the area that have the same level of interior design, amenities and finishes as what we are offering.”

Sales for the 122 units in the Quadrangle-designed, L-shaped, 12-storey brick building will launch in May. The property was previously home to a retail building demolished to make way for the project. It’s been vacant for about two years and was acquired by Canderel in 2018.

“We always look to uncover neighbourhoods in the city with potential that hasn’t been fully realized,” said Deitcher. “St. Clair West, west of Bathurst, has all the right ingredients.

“It’s in a prime part of the city, in between Forest Hill and Corso Italia, with a pedestrian-friendly main street and well-served by transit. The dedicated streetcar line takes you to St. Clair West subway station in eight minutes. You can get downtown in under 20 minutes.

“Over the last few years, there’s been a surge of young families moving into the neighbourhood and new businesses opening up. We think this new community energy will continue to grow, and we wanted to be part of it.”

St. Clair Village’s suites will range in size from 450-square-foot, one-bedroom units to 1,300-square-foot three-bedroom units with large terraces. Prices will range from the mid-$400,000s to more than $1 million. Purchasers will also have the opportunity to combine select suites to create bigger units. Occupancy is anticipated in the fall of 2021.

Amenities will include a temperature-controlled wine storage lounge and a fitness studio.

KingSett Capital is a joint venture partner with Canderel on St. Clair Village.

“We have a history of working on development projects together, and they are an ideal partner to have alongside as we create this series of developments,” said Deitcher.

Montreal-based Canderel was founded in 1975 and has regional offices in Toronto, Ottawa, Calgary, Edmonton and Vancouver. It manages approximately 23.2 million square feet and has acquired, developed and managed projects worth close to $15 billion over its history.

Canderel’s other residential projects in Toronto include:

* The Waterford and Waterford Towers near Humber Bay;

* and the lakefront Newport Beach community.

There are more Toronto residential projects on the way from Canderel, according to Deitcher.

“YC Condos, the final piece of our Yonge and College neighbourhood story, is coming to completion. Occupancy is underway and nearly 100 per cent complete. A big highlight for us, the project will feature the highest infinity pool in the Western Hemisphere.

“We also have two new significant mixed-use projects in the works.”

Canderel is working through design concepts for a 1927 heritage building on a 1.8-acre site at 545 Lake Shore Blvd. W., near Billy Bishop Toronto City Airport, which was the former home of Omni Television.

The company also recently submitted a zoning by-law amendment for 1075 Bay St. in order to build a residential tower that will also include 14 floors of office space south of Bloor Street.