The purchase of two Southwestern Ontario apartment properties for $50 million is likely just the... 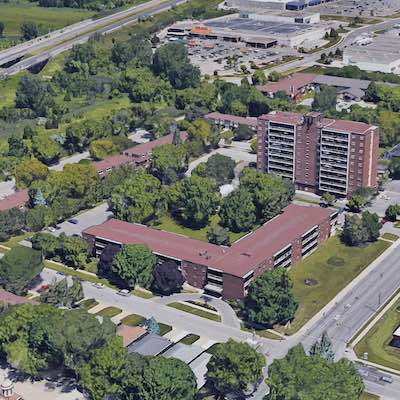 The purchase of two Southwestern Ontario apartment properties for $50 million is likely just the first of a series of acquisitions in the coming months for Canadian Apartment Properties REIT (CAPREIT), its CEO says.

“There is a very robust volume of transactions in the marketplace right now,” Mark Kenney told RENX. “You will see very, very high deal flow in Q3 and Q4.”

CAPREIT (CAR-UN-T) announced Tuesday it has waived conditions and agreed to purchase a two-property portfolio in London and Sarnia. The two sites comprise 301 apartments and townhomes and occupancy is 98.3 per cent, with only five vacant suites in the portfolio.

Kenney said the properties closely fit the profile CAPREIT is currently seeking: “Well-maintained, with excellent value-add opportunity, in markets we are familiar with, where we are growing our presence.”

The cluster is located in a low-density residential neighbourhood close to schools, parks, public transit and highways. Amenities include park-like landscaped grounds and a seasonal swimming pool.

The other acquisition is 492 Springbank Drive, a six-storey apartment building in Southwest London with 107 bachelor, one- and two-bedroom suites.

Located within a short walk of the Thames River, the property is close to a shopping mall, public gardens and other amenities, as well as local transport and major thoroughfares.

Closing is expected on or before Sept. 21.

Kenney was unable to name the vendor due to provisions in the sale agreement, but RENX has confirmed the properties were previously owned by Homestead Land Holdings Ltd.

Kingston-based Homestead also sold another portfolio of five Hamilton and London properties this week to InterRent in a transaction valued at $170.7 million (see InterRent to acquire Hamilton, London apartment portfolio).

CAPREIT says it will fund its acquisition via a combination of cash and cash equivalents, and will subsequently partially finance the buildings with new CMHC-insured mortgages.

Kenney said the economic shutdown during the early stages of the pandemic in Canada caused a pause in the market. Now, the fallout could be accelerating transactions in the apartment sector.

“As the economy opens up, we’re all opening up in terms of opportunity. So, there is pent-up supply coming to market,” he explained.

“On top of that, I think there is real deep concern about where our government might be going with taxation, as well as changes to CMHC’s financing policy.

With uncertainty on the horizon, Kenney said CAPREIT has slightly tweaked the types of properties it is seeking to acquire.

“Our conviction to value-add properties is heightened,” he said. “What I mean by that is when we are buying properties for 50 per cent of replacement costs, the rents are 50-per-cent-of-replacement-cost rents. So, buying properties in that sub-$2 market (per square foot) is very safe in a changing economy.

“Buying properties that are all at market rent clearly gives you market rent exposure, which could be negative in a volatile economy. We really like the sub-$2 market rent investment pieces.”

As a well-known value-add investor, such properties give CAPREIT plenty of flexibility. It can maintain the properties at status quo to keep rents lower, or improve the units and seek higher rents.

CAPREIT has already has an active year in several of its major Canadian markets.

A week ago it purchased The Sterling, a new, 88-unit apartment building in Halifax for $22.4 million. That added on to a major February deal in Halifax, when it closed on the acquisition of eight properties (1,503 apartments), doubling its holdings in the Nova Scotia capital with a $391-million investment.

In June, CAPREIT announced it was buying out the operating leases on eight Toronto apartment properties for $123 million.

It also purchased a newly constructed, 16-storey Montreal-area property in the municipality of Brossard for $43.5 million. The year-old building contains 112 apartments.

“We’re just excited that as each day goes by, we’re getting back to business,” Kenney concluded. “It’ll be a very active year for CAPREIT. We’re very optimistic that opportunities will come our way.”

CAPREIT is one of Canada’s largest real estate investment trusts. It owns approximately 56,700 suites and sites, including townhomes and manufactured housing, in Canada and indirectly through its investment in ERES, approximately 5,600 suites in the Netherlands.