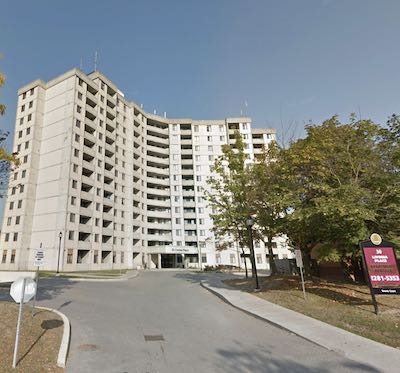 This apartment tower at 30 Livonia Place in Toronto is one of eight properties where CAPREIT has moved to buy out its operating lease earlier than planned. (Google Maps)

All of the new lease buyouts are binding agreements, other than the 33 Orchard View location, which remains conditional. CAPREIT says the transactions are expected to close by June 30.

President and CEO Mark Kenney told RENX negotiations had started several months ago. Rather than impeding the talks, the COVID-19 pandemic has actually made this transaction more timely.

CAPREIT previously closed the early buyout operating leases at 20 Shallmar Ave., 124 Broadway Ave. and 111 Davisville Ave. In total, it is investing $153 million for the 11 properties.

“I’m very excited to see CAPREIT simplifying the balance sheet and to have clarity on the freehold interest,” Kenney explained. “It allows us to access liquidity in a difficult time and it frees the way for us to seek development opportunities without seeking other permission.”

Each of the properties in this transaction is a concrete high-rise tower, at least four decades old, fitting the profile Kenney and CAPREIT prefer to acquire for the portfolio. “Multiple properties” also have future development potential.

They are also all well-located particularly with respect to transit.

“They are urban core,” Kenney noted, “located in close proximity to the subway, transit, schools and shopping.”

CAPREIT has three remaining properties under operating lease arrangements, all of which had been negotiated by the former ResREIT. CAPREIT absorbed ResREIT in a $500-million transaction back in 2004.

The remaining properties have buyout periods commencing between 2024 and 2028, though CAPREIT is evaluating whether to prepay those buyouts as well.

“It’s my strategy to only own freehold property because other structures are complicated and can cause unexpected issues.”

The $154-million purchase price represents a 29 per cent discount to the aggregate purchase price for the buyouts as set out in the respective operating leases. Under the leases, CAPREIT acts, or acted, almost like an owner of the properties though it did not have title.

“From an instrument point of view it operates like we own them,” Kenney said. “That prepayment was for 35 years.

“In the final 10 years of the leases, which is where we’re getting to pretty soon, there was a number of changes with respect to how the buyout would work.

“So, it’s a bit complicated but . . . we had the right to all the revenue and the obligation to all the expenses, without having title. This gives us title and with that title we can access liquidity.”

Financing for the acquisitions will initially come from the REIT’s acquisition and operating facility. CAPREIT then expects to replace that draw with mortgage financing in the near future.

The vendors of the eight new lease buyouts can elect to receive class-B LP units in CAPREIT Limited Partnership for all or part of the proceeds. The units, exchangeable for CAPREIT trust units on a one-for-one basis, would be issued at $48 per class-B LP unit.

CAPREIT estimates the lease buyouts will add $300 million to its fair market value. After costs, it expects a net fair value gain of over $150 million, of which $130 million was previously recognized.

It also expects the buyouts to provide “significant additional financing capacity” due to the anticipated increase in fair market values, low leverage on these properties and elimination of lending restrictions which are applicable to the current operating lease structure.

CAPREIT expects the 11 properties could have more than $500 million in incremental mortgage capacity above the current outstanding financing.

CAPREIT is one of Canada’s largest REITs. It owns approximately 56,800 suites and sites including townhomes and manufactured housing sites in Canada and, indirectly through its investment in ERES, approximately 5,600 suites in the Netherlands.

The REIT manages approximately 60,900 of its own suites and sites in Canada and the Netherlands, and additionally, approximately 3,700 suites in Ireland.