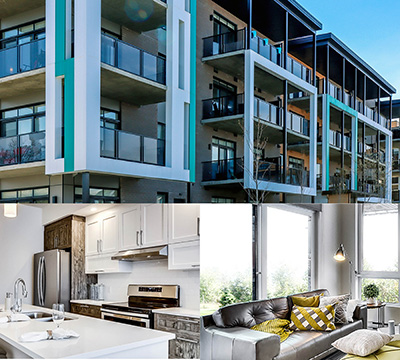 The acquisition is the first for Centurion in Gatineau, which sits across the Ottawa River from Ottawa. It is the latest in a string of recent additions to the trust’s portfolio. Financial details have not been disclosed.

“Centurion is excited about its first acquisition in the rapidly growing Gatineau region. Project Le Central offers its residents a luxurious and modern living environment, convenience and a highly amenitized lifestyle,” said Greg Romundt, Centurion’s president and CEO, in the announcement.

Le Central was built in three phases between 2018 and 2020 in the city’s newly developed Plateau submarket by Junic Real Estate Corp. , which is based in Gatineau and is heavily involved in developing the neighbourhood. It is comprised of seven four-storey institutional-quality buildings totalling 345 apartments.

Le Central has nearby public transportation and is located about 10 minutes from downtown Ottawa, along Bruxelles Road in the des Allumettiéres Boulevard corridor.

It is adjacent to Agora Urban Village, a large mixed-use development offering access to entertainment, restaurants, grocery stores and other retail, and outdoor public greenspace.

It is also beside Gatineau’s Central Park, a 26-acre natural green space with a skatepark, playground, outdoor winter skating rink and dog park.

Centurion has been busy making acquisitions over the past few weeks.

On Feb. 4, it announced the acquisition of Phase 1 at Metro Scott Road, a newly constructed multiresidential property in Surrey, B.C. It is the REIT’s second acquisition in Surrey and features two six-storey, luxury rental buildings comprising 233 units, with 4,728 square feet of ground-floor commercial space.

It is located at 11018 and 11088 126A St., five minutes away from Fusion, another multiresidential property which Centurion acquired in September 2019.

A day earlier, Centurion closed on the previously announced acquisition of a record-setting portfolio of 30 apartment properties in and around Montreal.

Centurion’s initial transaction is for a two-thirds interest in the buildings, which have all been constructed since 2016.

The REIT also said it has executed on an option to acquire the remaining one-third interest, which is slated to close later in 2022.

It’s the largest single multiresidential acquisition made in Quebec.

It is very close to the rest of Centurion’s existing Langford portfolio, beside Peatt Commons, less than 500 metres from Hockley Corners, The Arc, RidgeView Place, Village Walk, Robert’s Landing, Robert’s Place and 1.5 kilometres from Hedstrom House.