Management at Choice Properties REIT is “encouraged” by recent signs that business continues to r... 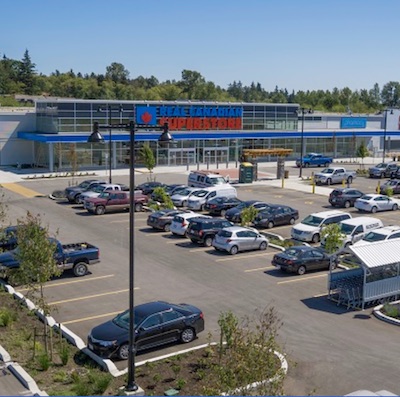 Management at Choice Properties REIT is “encouraged” by recent signs that business continues to rebound from the COVID-19 pandemic, even as the trust has pared the fair value assessments of its assets by almost $380 million in 2020.

“We’re encouraged by some initial signs of things returning to normal,” Choice (CHP-UN-T) president and CEO Rael Diamond said during the trust’s Q2 financial conference call with analysts this week. “Every day, more business reopen and people find more ways to get on with their daily lives.”

Revenues remained strong for Choice, which owns and operates more than 720 properties comprising about 65 million square feet of GLA. Needs-based retail comprises the bulk of its tenants, estimated at about 75 per cent of its revenues.

Stores owned by Loblaw Companies, under a variety of banners, are its most significant tenant, accounting for about 56 per cent of revenues.

“We just internally have a very conservative approach to valuation every quarter,” Diamond said, noting the lower Q2 valuation focuses on the retail portfolio and takes into account a number of factors which could impact tenancies, revenues and valuations as the pandemic continues.

Occupancy for the entire portfolio, including Choice’s office, industrial and multifamily assets, was down almost a full point to 96.8 per cent.

Diamond highlighted that rent collections for Q2 were 89 per cent of expected collections, and so far in July are even higher at 94 per cent.

“This is an encouraging sign and our rent collections are steadily increasing each month as more tenants are getting back to business,” he noted.

Choice’s financials were also impacted by $28.7 million in risk mitigation charges, including costs related to strengthening its balance sheet (extending the term of several of its debt facilities).

That figure also included $14.6 million in estimated lost revenue during Q2 from tenants.

This takes into account several factors, from smaller tenants which will be involved in the federal Canada Emergency Commercial Rent Assistance (CECRA) plan, to “case-by-case” agreements with some larger tenants, and bad debt due to business bankruptcies.

Under CECRA, which Diamond estimated to be about 30 per cent of that charge, Choice is assisting tenants with applications to the program. The owner of a property must compile all data and submit only one application on behalf of all eligible tenants.

“We’re not fully worked through the CECRA program,” Diamond said. “We’ve made an assumption what tenants will qualify. It’s a very, very labour-intensive program. We’ve filed roughly 200 applications so far.”

The final charge in that $28.7 million total is a $7.8 million credit loss on a mortgage which is in receivership.

It relates to the North Barrie Crossing shopping centre, where Choice has made a “stalking-horse bid” to acquire the asset from the debtor. That bid is still before the courts.

Choice’s overall debt to assets ratio at the end of the quarter 44.3 per cent, while its debt service coverage was at 2.6 times.

Diamond said virtually all of Choice’s developments are continuing on schedule.

“Our two largest ongoing projects are the residential developments at 39 East Liberty and 390 Dufferin, both in downtown Toronto,” he explained.

“These projects are under vertical construction and have not experienced any significant delays as a result of the pandemic.

“We anticipate completing construction at 390 Dufferin in Q4 of this year, and 39 East Liberty in Q3 of 2021, with a projected lease-up period of approximately one year for each asset following completion.”

While transaction activity “has slowed considerably,” the trust did make two key land acquisitions during Q2.

First, it bought an $8-million property at Bloor and Dundas in Toronto which will complement an existing land assembly Choice owns at that site.

It also acquired a 6.5-acre parcel of land from Loblaw for about $8 million. The vacant site is near Warden Avenue and St. Clair Avenue East, close to the Warden subway station.

“We are working on a potential rezoning of the site for a future residential density and hope to have more to report on this later,” Diamond said.

Looking ahead, both Diamond and chief financial officer Mario Barrafato expressed optimism values could see a reversal, for several reasons.

First, Choice’s industrial holdings are, they believe, currently undervalued based on market conditions in Toronto where a majority of its assets are held.

There’s also optimism for assets anchored by grocery retailers, even in the face of increasing e-commerce.

“On the industrial side, we are seeing users active in the market, looking for small buildings, particularly in Toronto,” Diamond added.

“The price they are willing to buy properties at, on a per-square-foot basis, would be far in excess of where we are carrying those assets on our balance sheets.

“So if a few of those transactions start to happen, we may be able to take some broader action.”

“If anything, the grocery stores, people want to be in those sites,” he said. “The cash flows would be investment-grade tenancies. The values could go the other way, they could become more valuable.”