COGIR Real Estate will soon begin to redevelop its “outdated” shopping centres in Quebec and tran... 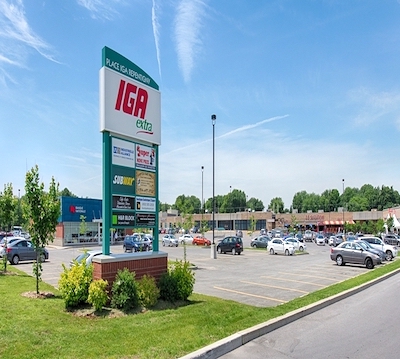 COGIR Real Estate will soon begin to redevelop its “outdated” shopping centres in Quebec and transform them into mixed-use developments that will include multiresidential towers.

The first shopping centre to be redeveloped will be Place Repentigny in Repentigny, off the eastern tip of Montreal.

Jean-Philippe Hébert, vice-president of development and project management at COGIR, made that announcement at the Quebec Apartment Investment Conference in Montreal on Feb. 13 during a discussion on mixed-use developments.

Hébert said decades-old shopping centres have become more and more outmoded and “something has to be done with these buildings, which are often very well-located in cities and have extremely high potential.”

A case in point is Place Repentigny, which was built during the 1960s in several phases. It is extremely well-located but, with 220,000 square feet, is too big for the area.

The shopping centre has a vacancy rate of about 20 per cent in its outdated interior mall.

“We sat down and thought ‘What can we do with this shopping centre to redevelop it and bring some value to it?’ ”

Plans call for the 45,000-square-foot interior mall to be demolished and replaced with a seven-storey multiresidential building with 190 units. “It will be a new type of mixed-use for the area,” he said.

About 45,000 square feet of green spaces will be added to the site because, as Hébert noted, “it’s nice to have a multiresidential development in a shopping centre, but if you remain surrounded by concrete, you won’t attract anybody.

“You have to look for an attraction like greenery and make the site attractive to people.”

Hébert says the City of Repentigny is 100 per cent supportive of the idea as it will bring in more taxes, increase property values, rejuvenate the area and bring more traffic to the rebuilt shopping centre.

COGIR has several other well-located shopping centres that can be redeveloped, he said. 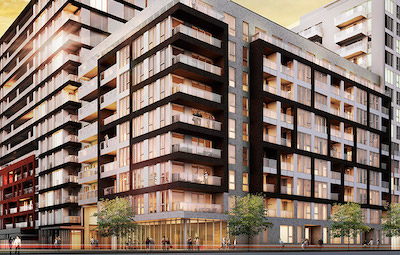 21e Arrondissement is a mixed-use development on a 100,000-square-foot site in the Faubourg des Recollets neighbourhood of Montreal being developed by Prével. (Courtesy Prével)

David Deschênes, director of conception and innovation at Prével, noted his company once concentrated entirely on residential, but has been specializing in mixed-use projects for the past 10 years.

One such development is 21e Arrondissement, a 100,000-square-foot site in the Faubourg des Recollets neighbourhood of Montreal, at the crossroads of Griffintown and Old Montreal.

The mixed-use project contains about 900 condos and rental units, a small office component, neighbourhood stores and a square.

It also contains an urban agriculture project on one of the rooftops, the first of its kind in a residential project in the city, Deschênes said.

21e Arrondissement is 80 per cent delivered, with the last two of the five phases to be completed by the end of summer. The project is fully sold.

Deschênes said developers will have an increasing role to play in confronting the challenges of isolation among single people as the population ages.

The project, which consists of two 20-storey towers in the Shaughnessy Village neighbourhood of western downtown Montreal, is 100 per cent sold and delivery of Phase 1 is almost completed. 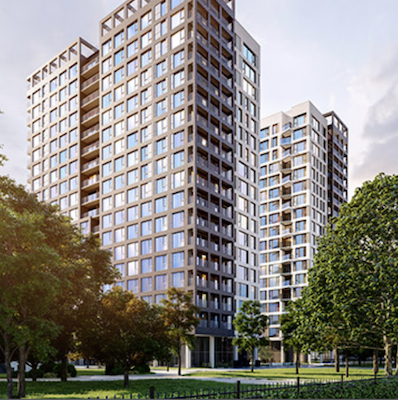 While developers often speak of mixed-use projects as combining residential and commercial spaces, “I think you can also have a mix of uses in terms of types of housing,” he said.

Union sur le Parc does that by combining several residential products within each tower.

The lower levels are comprised of smaller units aimed at young professionals. Units on the middle floors are compact but are targeted to families and can easily be converted into three-bedroom formats.

Upper floors consist of larger units targeted to an older clientele of Baby Boomers and empty-nesters.

Deschênes said the development includes common areas that match the needs of each group, including a 6,000-square-foot sports centre with a mini-gym for children, urban agriculture on the roof to encourage interactions between residents and traditional shared spaces such as rooftop patios.

“It has resulted in a multi-generational project,” he said. “We have extended families who have bought into the project, with five, six, seven, eight or nine members of a same family, who’ve each bought their own housing unit.”

While several of the people have their own apartments, they can live near one another.

“I think that when you talk about isolation – the impact of loneliness among single people – this kind of initiative shows the impact that real estate can have,” Deschênes said.