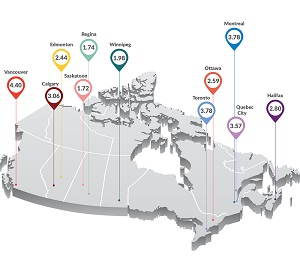 “Ideally, in a perfect property tax system, the ratio would be one-to-one,” said Terry Bishop, Altus Group’s president of property tax for Canada. “Lower tax ratios are an indicator that cities are balancing the tax load on commercial and residential ratepayers, which is appealing to businesses looking to relocate.

“It helps them create job growth and a more sustainable tax base. Having a lower tax ratio is a good thing for cities in terms of trying to attract new business.”

Property tax is the main source of revenue for Canadian municipalities and is used to fund services such as road repairs, education, recreational programs and public transit.

The annual Altus Group report, for which REALPAC was a supporting industry partner, looked at property tax rates in 11 major cities across Canada. Its findings are used by the two organizations to create dialogue with taxing authorities about tax fairness, influence public policy and promote a healthy business environment for the real estate sector.

Calgary had the largest commercial tax rate increase for the second year in a row, the report indicates, with a jump of 9.48 per cent. That pushed its commercial-to-residential property tax ratio up to 3.06.

This reluctance on the part of Calgary’s municipal government to either reduce tax-funded expenses or shift some of the tax burden to the residential base could do more damage to an office market that’s already in the doldrums.

“It drives up the expenses of occupancy in office space,” said Bishop. “That makes it more difficult for landlords to find new tenants.”

Quebec City was close to Calgary with its commercial-to-residential tax ratio increase, with a jump of 7.38 per cent placing a growing burden on its commercial ratepayers. Its commercial property tax rate of $36.09 per $1,000 of assessment was just below that of Montreal, which remains the highest of all the cities surveyed at $37.76.

One factor contributing to the high commercial tax rates in Quebec is the lack of specific taxes on services such as water, which many other Canadian cities charge to offset high property taxes.

Quebec City’s ratio was also affected by the province’s Bill 166, which standardized school tax rates across Quebec except for the island of Montreal.

“Quebec City’s residential school tax rate dropped significantly, which brought the total residential rate down and had the result of driving up the commercial-to-residential ratio,” said Bishop.

Vancouver remains the only city with a commercial-to-residential tax ratio in excess of four to one, despite posting the largest decrease of 9.72 per cent. It also had the largest drop in its commercial tax rate at 12.78 per cent. The drop in the ratio can be attributed to commercial real estate values increasing at a higher rate than residential values.

“Residential values have kind of slowed down the rate of increase with the new taxes brought in by the City of Vancouver on empty homes and foreign ownership, and an increase in school taxes on higher valued properties,” said Bishop. “By doing that, they didn’t have to change the residential tax rate as much while the commercial tax rate came down as a result of the growing asset value of commercial properties.”

While Alberta and British Columbia update their tax assessments annually to reflect current market values, Ontario works on a four-year assessment cycle. Quebec’s cycle is three years. That accounts for the relatively small changes in those cities’ commercial-to-residential tax ratios in 2018, and means larger changes should be seen in Montreal during the 2020 tax year and in Toronto in 2021.

While the national commercial-to-residential tax ratio is 2.9 across Canada, Winnipeg, Regina and Saskatoon are the only cities of the 11 surveyed to have ratios of less than two.

“They don’t have the big commercial assessment bases that Toronto, Montreal and Vancouver do, so there’s more of a balance between the reliance on the commercial base and the residential base,” said Bishop.

While Toronto and Vancouver remain hot commercial markets and property taxes might not be a leading factor for companies in deciding whether to move there, high commercial tax rates could hurt the cities as the economy softens.

“That’s an indication that municipalities are beginning to recognize that the ones above the average have to do something to get them down.”

The report also compares residential to multi-residential property tax rates. The findings indicate Ontario renters are carrying a disproportionate burden of property tax. While multi-residential building owners are being taxed equally to homeowners in most of Canada, apartment buildings built before 1998 in Ontario carry significantly higher ratios — with Ottawa at 1.36 and Toronto leading the way at 2.07.

“You’ve seen a continuation, with older properties, of higher taxation,” said Bishop. “But Toronto and Ottawa have adopted the new multi-residential tax class to give the newer buildings a break.”

This policy was scheduled to be reviewed by the former Ontario government; it remains to be seen what the new government will do.

The higher taxation levels on older multi-residential buildings can pose a potential challenge for landlords needing to fund repairs and maintenance. As a result, these costs are often passed on to tenants through increased rents.

“It’s just Ontario that has had a historic practice of putting a bigger burden on multi-residential properties,” said Bishop.