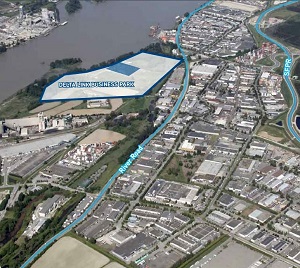 “It seems that anyone with a significant e-commerce presence is looking around,” Todd Yuen told RENX in an interview. Beedie is one of the region’s most active developers.

“It wasn’t that long ago that if someone had a 100,000-square-foot requirement for Vancouver, it was considered huge.”

He said companies looking for 200,000 square feet are now commonplace.

“I’m hearing almost on a weekly basis someone (asking): ‘What do you have for between 500,000 and 750,000 square feet’? And the million-square-foot mark has been bandied about for a couple of users in the last little while.”

Beedie Industrial is in final stages of developing a nine-building industrial park called Delta Link Business Centre. So far, seven of the buildings are complete, another is under construction, and work is expected to begin on the final building in early 2019, Yuen said.

When complete, the park located on Tilbury Island will include in excess of 1.7 million square feet of leasable and strata industrial space, he said. It is broken down into:

Most recently, Beedie completed a 300,000-square-foot build-to-suit building for an international brand, though Yuen declined to discuss the identity of the company involved.

Beedie bought the property in 2015 after a decades-long remediation at the site, which housed a chemical facility from the 1960s until the 1990s. The site was then rezoned, including 84 acres for development, 15 acres for parkland, and about four acres for new roads and a public space.

Yuen said build-out of a site this size would normally take up to 10 years. They’re well ahead of that schedule due to voracious demand for space.

“We’ll be fully built-out and completed with the (Delta Link) project somewhere by the end of next year, or the beginning of 2020,” he said. “It’s mind-boggling. I’ve been doing this for a while now and I’ve never seen this pace of development activity ever.”

Most of the demand has been coming from e-commerce and retail, Yuen said.

“That e-commerce sector and retail sector is absolutely massive.”

At the end of Q2 2018, Metro Vancouver’s industrial vacancy rate fell to 1.4 per cent, according to Colliers International. That figure remains well below the five-year average of 2.8 per cent and the 10-year average of 3.2, the firm said.

Concerns over NAFTA, U.S. President Donald Trump’s steel and aluminum tariffs against Canada and other macroeconomic disturbances seem to be doing little to quell industrial appetite in Metro Vancouver.

“There is an enormous amount of confidence,” Yuen said. “No one goes and spends — whether it’s $2 million or $50 million — on their business unless they’re very confident as to where it’s heading.”

Companies continue to hire and expand, Yuen said. “People are looking for more stability and for a foothold in the market.”

Higher prices remain in lockstep with demand, he said.

“It seems like every week I’m hearing of a different pricing benchmark to kind of tell me what industrial is worth now,” Yuen said. “This is true across every major municipality all the way out to Abbotsford.”

The leasing market is also strong, he said. “We’re seeing . . . absolutely no resistance to lease rates.”

Meanwhile, yields continue to fall as the cost of ownership rises. “There is such an enormous demand and appetite right now from the investment community for any form of industrial product. Yields just continue to be compressed for high-grade product.”

Yuen said Beedie aims to keep its momentum going with “a couple of joint ventures and a couple of acquisitions,” but will be proceeding with caution.

“With the momentum and the velocity you’ve got out there right now, it’s really easy to get caught up in it,” he said.

He said Beedie is always cognizant a bull industrial market won’t go on forever, and the company has no interest getting stuck with a “white elephant.”

EDITOR’S NOTE: This story was updated August 30 to include additional information about the total space, and the breakdown of that space, at Delta Link.

Captivate engaging, premium video content platform connects advertisers to an influential audience in a captive environment during the workday when business and consumer purchase decisions are made. Office elevator and…

Captivate engaging, premium video content platform connects advertisers to an influential audience in a captive environment during the workday when business and consumer purchase decisions are made. Office elevator and…