Most new housing exists on either end of a polarized spectrum; either single, detached houses or... 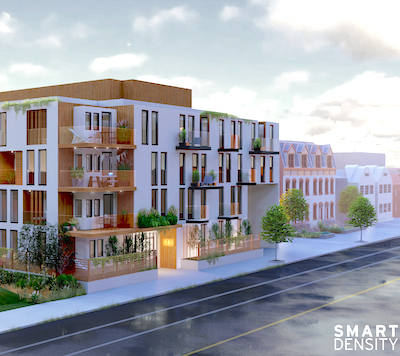 Most new housing exists on either end of a polarized spectrum; either single, detached houses or high-rise condominiums. Even though demand for Missing Middle housing options exists, they have become difficult to find and even more challenging to build.

Zoning regulations created within the Greater Toronto Area by cities decades ago have prevented gentle density from encroaching on established residential neighbourhoods. This discrepancy between progressive planning and zoning by-laws is a central challenge.

Instead of straightforward development approvals, these regulatory constraints have only exacerbated the challenges for redevelopment opportunities by decreasing land supply, creating pressures on affordability and limiting options for those who want to upsize or downsize. This phenomenon has left many cities with limited Missing Middle housing stock.

The Missing Middle idea was coined by architect Daniel Parolek to illustrate the lack of housing types being built, not as a result of market forces but rather the result of policy. Put simply, we have chosen to build everything but Missing Middle housing.

What is the “Missing Middle”?

According to the City of Toronto, a third of its land is zoned for detached housing while mixed-use development accounts for less than 10 per cent. The lack of available land creates a cascade effect on Missing Middle housing by limiting land that can be developed, thus encouraging lucrative large-scale high-density projects.

Therefore, cities must act by advancing new Missing Middle policies and zoning alternatives while managing NIMBYism among the status quo.

We must be able to achieve moderate intensification that is reasonable in our neighbourhoods. Building duplexes, triplexes, walk-ups and other reasonable mid-rise developments that fit permitted building envelopes is possible and needed.

The need for Missing Middle housing also contributes to the sustainability of our cities, allowing people to walk and cycle for their everyday needs by putting people right at the centre of highly sought-after amenities.

This minimum level of density creates the right amount of support for a mix of businesses from mom and pop shops to walk-up retail, consistently adding to the lively mix of people on foot and on two wheels.

The new pilot initiated last week by Toronto council’s planning and housing committee envisions how this gentle density could provide an opportunity for cities to create liveable communities, where we can maintain the integrity of the surrounding built environment while also introducing low-scale, pedestrian-oriented, family-sized units.

The pilot calls for a city-owned site, in collaboration with the private sector, which will materialize this spring.

As Toronto can attest, housing challenges are complex. Cities like Toronto need more opportunities across a spectrum of housing types, scale, tenures and levels of affordability.