In the past year, four of our friends started families – and moved to Hamilton from Toronto. Each... 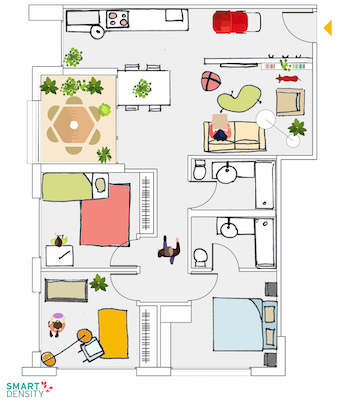 Design for a family-friendly, 790-square-foot multifamily unit created by Smart Density. For a larger, pop-out version of this image click this link.  (Courtesy Smart Density)

In the past year, four of our friends started families – and moved to Hamilton from Toronto.

Each of them moved from a condo rental unit in the core to a house in Hamilton. As with many others, they wouldn’t be able to afford a house in the Toronto core.

They moved to a house in Hamilton not because they were looking for a place with a backyard, but mainly because they couldn’t envision a unit in Toronto that would accommodate the needs of their growing families.

Toronto, as in many other major cities across Canada and the U.S., is experiencing major difficulties in meeting the evolving housing needs of its residents. Specifically, the lack of family-friendly housing has become a major obstacle to affordability.

Traditionally, multifamily housing had been provided by converting greenfield areas and farmland to single-family homes in suburban developments. However multifamily condo or rental units in dense developments within the urban core, or with acceptable access to the core, are rarely built despite being the best scalable solution.

Why is there so little family-friendly housing?

From the perspective of sustainability and urban resilience, building family-friendly housing in dense development patterns makes it possible to locate housing close to social, cultural, recreational and commercial amenities, to better utilize public investments in rapid transit and to reduce auto dependency.

Increasing the supply of multifamily housing will allow families to more affordably locate in areas with greater economic and professional opportunities – something that is becoming more and more difficult for a large, growing segment of the population.

The construction of multi-unit housing that currently exists has failed to provide suitable units of size, design, and price ranges for families, who tend to require more space, have less available income for housing and have greater sensitivity to location. (Story continues below video embed)

With such strong demand for multifamily units, it is strange to consider the notion that family-friendly housing as a unit type may work for select investors, but not the actual end users.

A commonly held belief within the development industry is that it is more difficult to build family-friendly units for end users because it requires long-term commitment from families. These families would need to purchase units prior to the construction.

This perception doesn’t hold up very well and could be addressed by educating the market.

One of the major changes needed to make it more feasible for families to live in a dense urban context is to increase collaborative efforts from both the public and private sectors.

The public sector has the ability to make the construction of family-friendly units more economically viable by offering greater flexibility on fiscal levies such as development charges (DCs).

As it stands, most developers aren’t prepared to take on higher levels of risk associated with building more affordable multifamily units. There is no question that demand exists, but the economic structure is in need of reform.

The City of Toronto’s Growing Up guidelines, which ensure 25 per cent of developments of 20 units or more are made into two- and three-bedroom units, is a positive way to mandate a more diverse unit mix.

With policy already in place, despite developers’ wishes, the question for them is how to take these ‘lemons’ (as they describe it) and turn them into lemonade.

The city introduced these guidelines due to the lack of units that work for families, and because large units that do get built don’t work well for families.

There are processes to deliver family-friendly housing that better meet the risk-and-reward propositions of our commercial realities and it is up to everyone to make them work.

The demand exists. The question is why private-sector actors don’t take the leap, but prefer to compete on the exact same product that suffers from sameness and floods the market with one unit type, leaving a huge opportunity on the table.