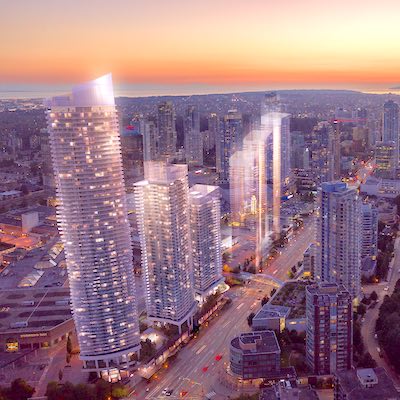 Concord Pacific is embarking on a three-tower Phase 2 at its Metrotown development in Burnaby. The site has three residential towers currently under development, with potential for two more towers in a future third phase. (Courtesy Concord Pacific Developments)

Concord Pacific Developments is planning Phase 2 of the massive Concord Metrotown mixed-use development, at the northeast corner of the Metrotown shopping centre, for a project that will eventually add eight towers and more than 3,500 homes to the City of Burnaby.

“We did phase the building, but sales went so extremely well on all three towers (in Phase 1) that we’re actually building all three simultaneously,” said Grant Murray, senior-vice president of sales for Concord Pacific Developments.

“Basically we’ve sold out everything that we wanted to sell. Some inventory is being held back. We’re not going to sell that for about probably three years, because we’ve got enough to more than cover construction financing for the entire project. So we’re well over 70 to 75 per cent sold on the total of the three towers.

“It’s made an enviable position to not have to actually phase the project. So we’re building the entire parkade all at once and we’ll be building all three towers at once. We’re quite excited about that,” he said.

“Once we do these first three towers, we are currently designing another five towers to go adjacent to it because we bought the entire Sears Metrotown site that is basically adjacent to Ivanhoe Cambridge’s mall.”

The project will connect to the Metrotown shopping centre. Condos in the first phase range from one-bedroom units of 468 square feet to three-bedrooms of 3,768 square feet.

Completion is expected around the end of 2026.

Murray said sales for Phase 2, which will include three more high-rise residential towers, will come along in about two years.

“Our planning department has already had discussions on the design and they’ve tentatively approved that,” he said, adding the next phase will have about 2,000 homes in towers of 40, 49 and 58 storeys.

It will also include more than 100,000 square feet of retail and commercial space and Murray said build-out is expected to be about five years.

Rezoning for the next three towers has been submitted to the city with a public hearing coming up soon, probably this fall.

It maintains a hygienic environment with mobile phone access control to major entry points, including elevators.

Elevators have air purifier filter systems to make the air cleaner. A filtration system in the hallways will increase airflow in certain high-traffic areas. It has reduced touch points.

There are steam closets in every suite, reducing the need to take clothes to dry cleaners.

“Concord BioSpace is bringing science and years of refinement of our products in response to the current global conditions, biospace and market demand which helps product sustainability and life flexibility,” said Murray.

Murray said Phase 1 of the condo development has 66,000 square feet of amenities “inspired by the world’s finest design of lifestyle.”

“You would never be able to attempt this unless you had economy of scale. In other words, a project of this nature, because you’ve got 1,400 units you can spread out the costs of these additional amenities without it hurting the pocket book of each person buying the suite,” Murray said.

Murray said there will be an area dedicated to bicycles.

“We have the world’s largest bike amenity (including a separate elevator to access the area),” he said.

“On the bike level we’ve included storage rooms that are actually complete rooms, not cages where you can see bikes, so they’re enclosed with a proper door. . . . They will have electrical power so if you want to have an e-bike they’ll have an electrical plug-in as well.

“We’ll also have a gear room that will allow you to go in and fix your bike.”

In addition to Phase 2, there is potential for another two high-rise towers on the site in a third phase.

The neighbouring Metrotown shopping centre is another major attraction for future residents.

“Ivanhoé Cambridge is kind of committed with the city to redevelop the entire mall. They will be doing a major change to make roads and outdoor space, as opposed to an indoor mall,” Murray explained.

“It will keep some components of the indoor mall. . . . This is the city’s business plan to have more roads connecting through, more streetscape, more street animation.

“When we’re doing master-planned communities, I talk about OPM – other people’s money.

These communities allowed Concord to “keep increasing and adding amenities, not only to the building but the surrounding area.”

Steve McLean Residential Development National Sep. 12 2022
M
Mario Toneguzzi Business reporter
Mario Toneguzzi, based in Calgary has 37 years of experience as a daily newspaper writer, columnist and editor. He worked for 35 years at the Calgary Herald covering sports, crime, politics, health, city and breaking news, and business. For 12 years as a business writer, his main beats were commercial and residential real estate, retail, small business and general economic news. He nows works on his own as a freelance writer and consultant in communications and media relations/training.