The intensification of existing sites has become an increasingly important part of growing purpos... 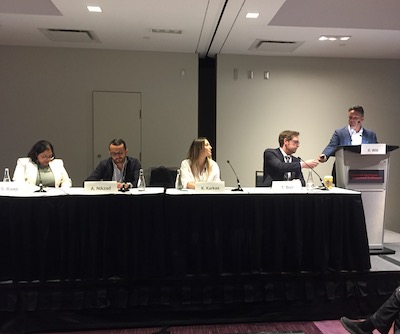 The intensification of existing sites has become an increasingly important part of growing purpose-built rental housing across Canada, and executives addressed key issues at the Sept. 7 Canadian Apartment Investment Conference at the Metro Toronto Convention Centre.

“We really like the multifamily space,” said Thomas Burr, vice-president of mixed-use development for ONE Properties.

The privately owned integrated real estate firm, launched in 1987, is largely focused on the multiresidential and industrial asset classes and employs about 115 at offices in Edmonton, Calgary and Toronto.

“I think it’s a good hedge for inflation over the long haul and, with demographics as they are, we believe it will be a major part of our business,” said Burr.

Burr cited planning permission plus permit statistics for three major Canadian markets and said the average time to get through the process in Toronto was 58 months. It was 28 months in Vancouver and 17 months in Calgary.

ONE Properties’ BLVD Beltline project in Calgary, the first phase of which is comprised of 650 residential units in 34- and 37-storey towers along with 16,500 square feet of retail space, took just 12 months to be fully approved.

Upon completion, BLVD Beltline will have three towers with 1,030 units and 21,591 square feet of retail at the intersection of 12 Avenue SE and Macleod Trail SE.

Armel Corporation vice-president of development and construction Ardy Nikzad would like to see zoning designations simplified to speed up the municipal approvals process.

Armel is a privately owned real estate development company founded in Guelph, Ont. in 1965 which focuses on large master-planned communities and transit-oriented projects.

CreateTO is an agency that manages more than 8,000 properties owned by the City of Toronto. Its Housing Now program was launched in 2018 and includes 21 sites where it’s looking to create transit-oriented, mixed-use communities with parks, daycare centres and other needed amenities.

The goal is to partner with the private and non-profit sectors to introduce thousands of housing units, including 10,000 affordable units, over 10 years. The 21 current sites represent about 5,000 of those affordable units.

CreateTO senior VP of development Salima Rawji said the city is investing more than $1.3 billion and expecting $7.3 billion in private investment for its housing projects.

No existing or proposed multiresidential development can have more density than what CreateTO plans to build nearby, according to Rawji.

The agency takes zoning approval and political risk off the table before developers design, build and market the buildings.

“Transit orientation is critical because what we’re trying to do is leverage residual land value off of market demands to create affordability,” said Rawji, who noted condominium development opportunities will also be added to “help juice that infrastructure.”

Transit-oriented development also reduces the amount of parking spaces required, which can save significant costs.

Armel entered the Barrie, Ont. (just north of Toronto) residential market in the mid-1980s by rezoning and developing in what’s now known as the quickly growing city’s south end.

It continues to hold and develop hundreds of acres in the area, including land beside the Barrie South GO Transit station that Armel calls Yonge GO Village. The 70-acre site will have 1,100 purpose-built rental and condominium units and 35,000 square feet of retail in its multiresidential portion and 400 townhouse units further to the north, of which 300 are occupied or under construction.

Yonge GO Village will also include two schools, a two-acre park, baseball diamonds, a pond and walking trails, as well as an additional 25,000 square feet of retail on the west side of Yonge Street.

Rawji said paramedic hubs will be included in its new Housing Now projects across Toronto. They could also include space dedicated to schools, libraries and other important community uses.

Burr said ONE Properties sites are often in core nodes of urban areas and its buildings usually have a commercial element. It pushes back against mandated retail at its properties if it doesn’t believe the use makes commercial sense.

ONE Properties uses street frontage for gyms, mail rooms, leasing centres and other areas of activation. It’s wary of including upper-level office space unless there’s a compelling case for it.

“It’s just a purely commercial decision,” said Burr. “If you’re trying to set aside 10,000 square feet of office and there’s no commitment from a tenant, it’s quite difficult to take that on.”

ONE Properties is becoming more interested in commercialized residential lobbies and including a restaurant or other amenity that complements the branding of the building.

Toronto-based RioCan Living was established by RioCan REIT in 2018 to make better use of, and add density to, its retail portfolio to create mixed-use properties.

RioCan REIT has 202 properties that are primarily based in Canada’s six largest markets and located close to public transit.

RioCan Living has 10 operational rental properties with 2,215 units either leased or in lease-up.

It has approximately 16 million square feet of zoning-approved land, of which approximately 70 per cent is earmarked for residential density.

It has another 43 million square feet in the pipeline for potential development, with a goal of delivering 10,000 rental units over the next decade.

With long timelines for developments, RioCan Living VP Kalliopi Karkas said it’s not always immediately obvious what amenities they may require — whether it be a daycare centre, community centre, swimming pool or something else.

However, it will set aside space from the start to accommodate whatever future use is decided on after collaboration with the municipality and local community.

Aiming for energy efficiency and sustainability

“We are motivated to push the envelope and start setting some examples in the market around energy and practices,” said Rawji, noting CreateTO projects meet at least the secondary tier of the Toronto Green Standard and are aiming toward net-zero energy standards.

CreateTO is working on a district energy investment in the Bloor Street West and Kipling Avenue node where five out of the seven blocks of a development will be for housing.

CreateTO is also exploring the use of mid-rise repeatable mass-timber buildings and hybrid structures for sustainability purposes.

The developers of The Well development at Front Street West and Spadina Avenue in downtown Toronto entered a partnership with Enwave for a thermal storage facility located below five levels of underground parking.

“We’ve got long-term skin in the game to make that commercial investment,” said Karkas.

RioCan Living has also installed geothermal heating and cooling systems at two of its rental properties and is trying to quantify the annual cost savings.

ONE Properties partners extensively with institutional partners that have environmental, social and governance mandates.

Burr said green premiums can now be obtained for prestige assets in Europe and New York City. He says that should become more common in major Canadian markets as mandated energy and carbon reduction regulations expand.

Nikzad said storm water management is a big part of sustainability and noted Armel has built an 11-acre pond for that purpose at Yonge GO Village.

Steve McLean Residential Market Trends National Sep. 8 2022
Steve McLean Business reporter
Steve is a veteran writer, reporter, editor and communications specialist whose work has appeared in a wide variety of print and online outlets. He’s the author of the book Hot Canadian Bands and has taught reporting to college students. He is based in Toronto.