Coquitlam is embarking on a major urban planning mission that will take decades to realize: the t... 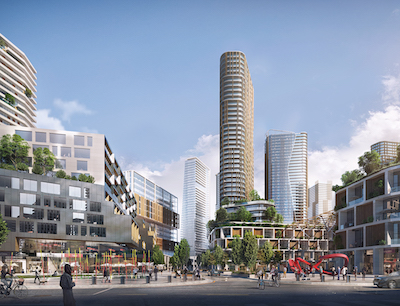 Coquitlam is embarking on a major urban planning mission that will take decades to realize: the transformation of 1970s suburban strip malls and parking lots into a rich, diverse and walkable urban core.

Coquitlam’s city centre doesn’t have historical neighbourhoods, like Vancouver’s Gastown, with its cobblestone streets. It doesn’t even have an old warehouse section for hip conversion, such as Portland’s Pearl District.

However, it does have the benefit of a breathtaking mountain backdrop and forested trails — so the city could create a unique urban core within 15 minutes access of mountain biking.

“You can take some of the recreational opportunities you get in North and West Vancouver and put it together with the urban amenities of downtown Vancouver, and you have the best of both worlds,” said Andrew Merrill, director development services, City of Coquitlam. “It’s building a downtown from scratch.”

The idea is to create a self-sufficient urban core, with new residential and office districts, and an entertainment district extending south from Lincoln SkyTrain station.

It means incorporating all the attributes of good city-making as an antidote to the vehicle-centric, highly un-walkable infrastructure that once ruled suburban areas.

“We don’t have that historical urban fabric, so we have to introduce a bunch of new streets to break up the large blocks and put in dense urban streets so there is a more robust grid,” said Merrill, a city planner by trade. “Walking down the side of Lougheed Highway is not fun.

“Robson Street or Water Street in Gastown is appealing because there is lots of visual interest and there is texture in terms of the storefronts — we’re trying to replicate that, but in a new way.”

The undertaking started decades ago, back when Coquitlam was “just forest and mobile home parks,” said Merrill.

However, it wasn’t until rapid transit arrived to the area that the plan truly gained momentum. The expansion of the Millennial SkyTrain line into Coquitlam, which opened in 2016, was an instant game-changer for the city and a major draw for developers.

Within months of the province announcing the new line, the city completed its transit-oriented development strategy. It set about updating the neighbourhood plans — including the complex plan for the new city centre.

That plan is now wrapping up, a three-year process that had gone through several rounds of public engagement and analysis. It goes before council in September and once officially approved, development can begin.

It will be a massive master plan in community design, with an emphasis on employment. Already, thousands of units of residential housing are in the pipeline, but the future will not be a sea of residential towers.

Two business districts have been mapped out and the city has created incentives for stand-alone office buildings. It doubled the minimum employment-generating floor space requirement from a 0.5 floor area ratio (FAR) to a FAR of 1.0.

“Our downtown needs to be a complete community and have that range of jobs and shops and services and other community amenities,” said Merrill.

“Most office space we get now is second or third floor on mixed-use condo buildings, which can work for some businesses, but it doesn’t work for all of them.” 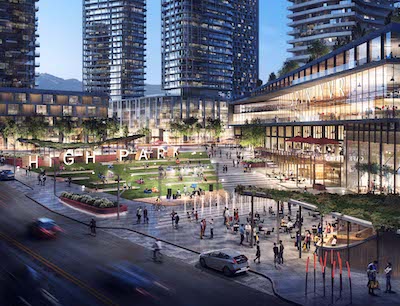 High Park in Coquitlam is shown in this artist’s conception. (Courtesy City of Coquitlam)

What differentiates Coquitlam’s city centre from past community planning is the large multi-acre, multi-phase sites which are part of the plan. It’s a far different process than building out a community with typically smaller developments.

About half a dozen large commercial property owners have invested in the plan, and the two biggest involve major Canadian real estate investors QuadReal and Morguard.

QuadReal has partnered with Langley-based developer Marcon to build 10 towers, including rental towers and one office tower, on a Chrysler dealership site on Lougheed Highway.

Morguard is the long-time owner of Coquitlam Centre shopping mall, a 60-acre site that will be redeveloped to include office and residential towers, retail, hotels, parks and public plazas.

“They have a long-term interest. So, they want to do both buildings and streetscapes and public spaces that are of high quality,” said Merrill.

“We have seen some of those big pension funds or REITs headquartered back in Toronto — they are coming out here and partnering with a local developer to get their foot in this market,” added Merrill.

“These are historically big shopping plazas, from 10 to 60 acres for Coquitlam Centre. So when I think about the development potential, it’s huge.”

Coquitlam as a whole is poised for a growth explosion.

He estimated two-thirds or three-quarters of development in the pipeline is happening around the transit-oriented districts near SkyTrain stations.

Outside the city centre, large-scale development is also happening in Burke Mountain, in northeast Coquitlam, where the city owns more than 100 acres of developable land.

As neighbourhood plans were completed over the years, the city started selling off serviced, pre-zoned sites through public tender to developers, most of them townhouse sites, according to Curtis Scott, manager, land development, City of Coquitlam.

The master plan for that area includes a 39-acre village that will include a community centre, about 120,000 square feet of storefront retail and possibly four-to-six storey mid-rise apartment buildings.

The city is still in the early stage of building roads and servicing sites, so the details are still in the works.

The idea is to offer housing options other than the usual detached houses, which can cost around $1.5 million — out of reach for many.

For developers, the streamlined process of acquiring pre-zoned land is a major savings in time. Last year, the city sold nine acres to developer Mosaic for townhouse developments.

Mosaic is busy with several townhouse projects in Coquitlam, as are developers Townline and Polygon.

“We own a lot of land, so it’s a lot of master planning and we help focus on large-scale neighbourhood development and community building,” said Scott. “We just bring lands to developers to construct. And because they are pre-zoned and serviced, they are what we call ‘turnkey’ development sites.

“So developers can come in with their development application and sometimes they are under construction within a year or so. It moves quickly.”

Once SkyTrain continues to expand with a proposed Broadway subway extension to the University of B.C., that will generate even more growth in Coquitlam, said Merrill. Nature-loving students won’t have to live in pricey, congested Vancouver.

“We need a more diverse range of home prices and tenures and types of housing, because eventually Coquitlam will be a one-hour SkyTrain ride from UBC,” said Merrill. “It will be this big east-west connection across the whole Burrard peninsula.”

Coquitlam prepares to sell tracts of its development land