The demand for new condos and rental housing has remained stable in Montreal despite the COVID-19... 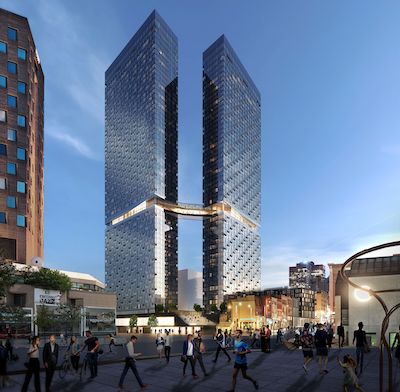 The demand for new condos and rental housing has remained stable in Montreal despite the COVID-19 pandemic, but that picture could change if the unemployment rate remains high and immigration rates fall.

Those were some of the conclusions from three of the city’s major residential developers at a June 12 webinar on real estate development and the residential market in Montreal. The event, presented by the Institut de développement urbain du Québec (Urban Development Institute of Quebec), attracted about 600 viewers.

Marco Fontaine, vice-president, real estate development, residential and marketing at Devimco, said the outlook is for uncertainty in 2020 and optimism for 2021.

“If we succeed in flattening the curve, I think the market will pick up faster than we think,” he said. “Overall, the demand is still there. That’s very positive.”

Fontaine said Devimco president Serge Goulet challenged salespeople a few weeks ago to sell 100 condo units by mid-September. That goal should be reached by mid-July.

“It’s very good news. The market is there. I believe good projects can go ahead without any concerns.”

He noted, however, condo sales have been harder to finalize at the Quartier Solar Uniquartier mixed-use project in Brossard on the South Shore, which is targeting second or third buyers.

The buyers, who are often empty nesters and baby boomers, have to put their current houses up for sale, which has made them more reticent.

Sales are going well at the 264-unit Auguste et Louis condo development in the Quartier des Lumières, next to the current CBC/Radio-Canada headquarters. “We’re really surprised.”

There has also been strong interest in the Maestria project (with 58- and 61-storey towers) from European clients, who are taking advantage of the favourable Canadian dollar exchange rate.

Laurence Vincent, co-president of Prével, said reservations were high for two new projects it launched in February, Quartier Général in Griffintown and Esplanade Cartier near the Jacques Cartier Bridge.

By April, clients were still on board but had lots of questions. Still, “sales, for the most part, were converted.”

Although sales are taking longer to complete, interest has remained strong and buyers are asking few questions about prices.

“Clients find prices to be very acceptable,” she said. “Our products have a very good quality-price ratio. (They’re) not excessively luxurious. People feel they’re getting value for their money.”

Who is buying Montreal condos

Vincent said, in general, there are three types of clients for its projects in the coronavirus era:

* The first group thinks confinement will end soon and we’ll start to consume and live like before. “I have money, I’m not afraid” is their view;

* Second, there are the cautious people who look forward to life getting back to normal, but don’t want to put themselves at risk in terms of making the condo buying leap;

* The third group is comprised of people who are scared about going back to normal – and are prepared to take money out of the bank and hide it under the mattress.

The first group is comprised mostly of young people, for whom “it’s life as usual. Nothing has changed for them.”

Middle-aged people, primarly empty nesters who are more cautious about buying, make up the second group, and the third is older.

The scenario is similar to what’s happening in Asian and European markets which are emerging from confinement, Vincent said.

Vincent downplayed predictions people will move away from cities as a result of the pandemic. There have always been people who have predicted the end of cities, but the forecasts have not come to pass.

She said if there is a small exodus to the suburbs or the countryside, it will be temporary or by people who already planned a move.

The pandemic should not serve as an excuse to return to old habits of urban sprawl and agricultural dezoning “because it’s not a viable model,” Vincent added.

Stéphane Côté, president of DevMcGill, said Montreal’s advantage is that it’s a medium-sized city with relatively easy access to nature.

“In that respect, it will always be a desirable city.”

The company sold about 30 per cent of Phase 3 of Tak Village – a Scandinavian-inspired condominium tower and townhouses project in Rosemont – in two or three weeks after it closed its sales office and shifted sales online.

For example, DevMcGill received court permission to conduct an online meeting to transition a new condo to its board of directors, one of the first times this has been done in Quebec.

“It worked,” he said. “We’re finding new ways of doing things, ways that will stick.”

Fontaine said he is optimistic about the future, but identified four risks that lie ahead: The possibility of a second wave of COVID-19, the potential for high unemployment, the fate of government support programs, and the impact of the pandemic on immigration – Montreal was expected to have between 41,000 and 44,000 immigrants in 2020, which may not be reached.