Kelowna has set a record for approved building permits for a single quarter. Through the first qu... 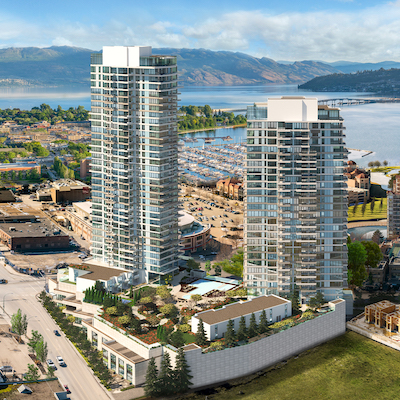 Kelowna has set a record for approved building permits for a single quarter. Through the first quarter of 2019, the City of Kelowna issued $333 million in building permits, according to urban planning manager Terry Barton.

“That is the highest number that we’ve ever taken (in one quarter),” he told RENX in an interview.

He said the strong start to this year follows about four straight years of what has been Kelowna’s strongest-ever building cycle.

The building surge is apparent across multiple sectors, with both commercial and residential projects.

“We’re seeing mixed-use and we’re seeing renewed interest in towers and large, complex projects like that,” he said. “(We’re) also seeing quite healthy growth in institutional (construction) and commercial industrial is expanding.”

Barton said Kelowna, a city of about 135,000 in the Central Okanagan Valley, is experiencing “well-rounded” development.

The majority of the notable projects are downtown.

However, commercial industrial permits are also surging along the Highway 97 corridor. The route cuts north through the city past the University of British Columbia Okanagan and Kelowna International Airport.

“We also still have a number of expanding residential neighbourhoods on our hillsides that are going quite strong,” he said. “It first starts with the foundation of Kelowna, (which is) having a strong and growing university, having an emerging health-care sector and the largest hospital in the interior.”

Kelowna’s expanded airport has also better connected the region to other major cities across Western Canada, he said.

Those key elements were not in place just two or three decades ago.

The largest ongoing project in the city is the One Water Street two-tower condo complex.

Under construction now by North American Development Group (NADG) and Chilliwack, B.C.-based Kerkhoff Construction, the downtown complex will include Kelowna’s tallest tower at 36 storeys and a second tower at 29 storeys.

The 2.9-acre site will have a total of 426 homes when fully realized.

“We’re on time and we’re on budget,” said Henry Bereznicki, a partner with NADG. He said the complex will feel like a resort in Cancun.

When the developers launched the project, they estimated a three-year gap between the first and second towers. “We had such huge and outstanding demand,” Bereznicki said, “we sold 92 per cent of the first tower literally in a few months.”

So, they decided to construct both towers at the same time.

“That was a good gamble,” he said. “The second tower is also almost 85 per cent sold out now.”

Construction on the first tower has reached the fifth floor, while the second tower is at the first floor. Both towers are expected to be completed by spring 2021.

Kelowna is not immune from the slowdown in the condo pre-sale market being felt in Metro Vancouver, Bereznicki said.

“The sales levels in Kelowna are not as brisk as they were 24 months ago, and I think that’s across all levels of housing in the Kelowna valley,” he said. “Things have slowed down. But as far as our buyers go, to my knowledge we haven’t had one buyer default . . . (or try) to back out of the building.” 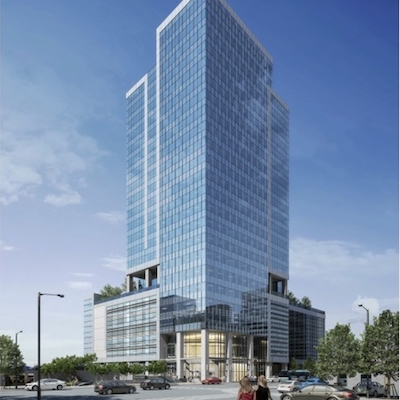 The Landmark 7 office tower will be the largest at the Landmark District. (Courtesy Al Stober Construction)

Residential isn’t the only sector with activity.

Construction on the downtown Landmark 7 office tower has just begun, said Dallas Gray, the marketing agent for the Landmark District complex being built by the Stober family.

Landmark 7 is the latest office tower in the complex, which has more than 700,000 square feet of office and commercial space and hosts more than 3,500 workers.  Gray said the 23-storey, 224,000-square-foot tower will be the largest in the district clustered in central Kelowna on the south side of Highway 97.

The building is expected to complete in mid-2022.

It will feature ground-floor retail to augment the adjacent Landmark District Market area, which is about to open.

Other amenities will include a state-of-the-art fitness centre on the second floor, and an 11,000-square-foot events centre on the fifth floor capable of accommodating 350 guests, outdoor entertainment deck, community gardens, electric car charging facilities, bike lockers and a rideshare program.

Kelowna’s overall office vacancy is about five per cent (roughly two per cent at the Landmark District), Gray said, noting they expect the city’s population to climb by an additional 50,000 through 2040.

Bereznicki said Kelowna attracted his company due to its emerging tech scene, growing university and role as the interior’s major health-care centre. “It is the dominant market for the interior of B.C.”

NADG is a developer with Ontario origins that is now mostly active in the U.S. It has 13 offices around North America and focuses on residential and retail development.

NADG is also part of a group of developers building an 873-home suburban community north of Kelowna called McKinley Beach on Okanagan Lake. Construction started about four years ago and so far about 250 single-family home sites have been sold.

Bereznicki said about 150 of the homes are built or under construction at the location, which also includes a new $5-million marina built by the developers.

EDITOR’S NOTE: This story was updated to correct the total number of units which will be constructed at the One Water Street development. It will contain 426 condos.