Montreal-based developer Devimco Immobilier says it has been chosen by the City of Longueuil to help develop and plan a $500-million mixed-use urban living space at the Longueuil-Université-de-Sherbrooke Métro station. 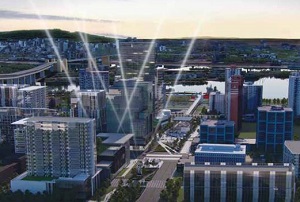 The Longueuil Centre-Ville development is a planned $3 billion injection into the Montreal-area city’s downtown. (Image courtesy City of Longueuil)

The transit-oriented development (TOD) will cover an area of one million square feet and will be built above the Métro station, according to a Wednesday morning media release.

It’s part of Longueuil’s more-than-$3-billion Centre-Ville project, which the city says will essentially create a new downtown around its existing Métro station.

The Devimco portion of the project includes a residential component with 525 condos and rental units, a hotel and traditional office space as well as extensive co-working spaces that could serve as incubators for start-ups and small to medium enterprises (SMEs).

“This project is right in line with Devimco’s philosophy. The idea is simple, but ambitious,” said Devimco Immobilier president Serge Goulet in the release. “We want to achieve Longueuil’s vision by creating a multi-functional urban core where integrating different experiences is key to developing a genuine living environment.

“That’s why we’re planning an integrated, mixed-use space where people can live, work and access the services they need.

“They’ll also be able to enjoy different cultural and culinary experiences and attend school there.”

The area is already served by local stores and businesses, but features potential for further commercial and cultural development. There are also opportunities to strengthen the already considerable educational offerings thanks to the presence of three university campuses: Université de Sherbrooke, Université de Montréal, and Université du Québec à Montréal (UQAM).

The combination of new and existing infrastructure will give new impetus to the neighbourhood and create an ideal site for implementing best practices in eco-responsible urban development, all just steps from Vieux-Longueuil.

The sector serves as a transit hub with its Métro and bus terminal serving Longueuil as well as municipalities in neighbouring Montérégie.

Longueuil, part of the greater Montreal area on the South Shore, has a population of 239,000. Its existing downtown is home to the 30-storey Place Charles-Le Moyne, a hotel, a satellite campus of the Université de Sherbrooke and the Longueuil bus terminus and Métro station.

The transit hub is the largest of its kind in Quebec with more than 75,000 passengers daily.  The city is also pushing for construction of a second Métro station closer to the river, though that has yet to be confirmed.

Plans call for 8,500 new housing units ranging from luxury condos to seniors housing, creating a live, work and play atmosphere. The new downtown will be much more accessible – with walkways crossing nearby highways and providing access to the old quarter of Vieux Longueuil.

There is the potential for 1.5 million square feet of new office space, with tech firms such as SherWeb and financial group SSQ committed to building new headquarters. SSQ opened its new Tour SSQ head office in 2016 near the Longueuil Métro, a 12-storey, 215,000-square-foot building built at a cost of $70 million.

Plans also call for a cultural complex including theatres and a public square for festivals and other events.

The location is one of the last riverside sites available in the Montreal area. About 4.5 kilometres of riverside parkland are also contained in the city’s conceptual plans.

Completion dates for the various phases of the new downtown have not been announced.

Devimco Immobilier is a developer with expertise in the creation and execution of large real estate projects, in particular lifestyle and TOD (transit-oriented development) complexes that combine commercial, business, leisure, and housing components. Devimco Immobilier was the first real estate company in the country to develop what it calls a “lifestyle complex”, with Quartier DIX30.

Since 2005, Devimco Immobilier has been building and expanding the District Griffin project. The company is developing the $1.3-billion Solar Uniquartier, the largest TOD project in Quebec, on the northwest corner of Autoroutes 30 and 10 in Montreal.

Devimco Immobilier is also developing its new flagship project, Square Children’s, on the site of the former Montreal Children’s Hospital in downtown Montreal’s west end, which will breathe new life into the neighbourhood.