“Distrikt is only five years old, but it’s a business that was 25 years in the making,” co-founde... 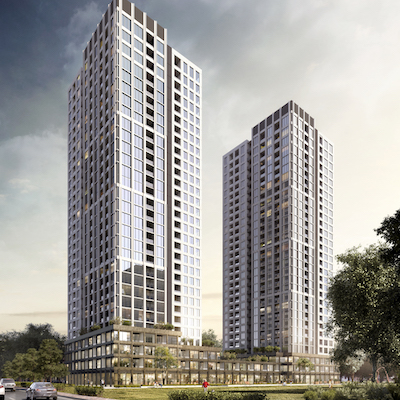 Distrikt Trafalgar will be the first venture into high-rise development for Distrikt Capital. (Courtesy Distrikt)

“Distrikt is only five years old, but it’s a business that was 25 years in the making,” co-founder and chief executive officer Paul Simcox says of Distrikt Capital, which acquires and develops Greater Toronto Area (GTA) real estate.

“We’ve brought together a lot of experience and work that people have done at other locations, and they want to do it at Distrikt.”

Simcox is also the founder of NorthHaven Capital Group. The private equity and real estate investment and advisory firm is focused on multi-year corporate and portfolio mandates, as well as new platform creation, investment and growth.

Simcox started his career in investment banking and private equity in New York City before returning to Canada in 2007 to co-found Whiterock REIT, a Toronto Stock Exchange-listed firm that was acquired in 2012 by Dundee REIT (now known as Dream Office REIT). He’s also been involved with retail and residential development in Canada and income property acquisitions in the United States.

Toma previously co-led an international supply and construction services company called Caribbean International Supply that was based out of Toronto but with multiple offices in Central America. It was heavily involved in the Caribbean resort development industry.

The firm was sold in 2008 to enable him to return to Toronto to build custom homes and development properties.

The two men became friends when Toma was building a home for Simcox. They thought there was a good business fit between their skills and experience and they launched Distrikt Capital in 2015.

“We have the ability to oversee projects, not just on the development side, but also from construction to occupancy,” said Toma. “We’ve attracted a lot of attention from financial institutions and have a mix of private investment and institutional investment working with us.”

Distrikt, which will be up to 15 employees by the fall after making a couple of new hires, invests alongside its partners in every deal.

Distrikt isn’t involved in property management at this point.

“Once our portfolio is larger, we might look at it, but right now we get the best service and value from larger providers,” Simcox told RENX.

While Distrikt’s early focus was on low-rise housing, it’s moving more into mid-rise and high-rise residential development, with some projects also including small commercial components.

The company’s current focus is on projects in Oakville and Toronto.

“We look at ourselves as investors first and developers second,” said Simcox. “From an investor viewpoint, we think the GTA is an excellent place to be.”

Simcox said Distrikt has land banked which can support up to 1.8 million square feet of development.

“We have a robust pipeline and are always looking for new opportunities where we can see value in the land, number one, and second in the eventual build-out.”

Distrikt The 6ixth is a sold-out 100-townhome development that’s delivering properties and will be finished construction this year.

Distrikt Trailside 2.0 sold more than 200 units, both virtually and through a sales centre, in 72 hours. After selling most of its first release, it’s pushing the second release up to this month.

The two Trailside projects will combine to have about 600 mid-rise and townhome units.

“People are excited about it because it’s a combination of good value, good design, good location and on- and off-site amenities,” said Simcox. “We look for what we call walkable suburban locations where you can walk to major transportation, grocery stores, schools and sports infrastructure.

“That’s what attracted us to these Oakville locations.”

At Distrikt Station, land is still being assembled for a condo project planned for the foot of the Queen Elizabeth Way and Trafalgar Road, near the heavily used Oakville GO Transit station.

Distrikt is working on a site plan application for that site as well.

Distrikt Trafalgar will mark the company’s move into high-rise development, with two 30-storey towers that will combine for about 650 units.

It’s on a main artery in north Oakville, close to the Trafalgar GO station and within walking distance of grocery stores, restaurants, banks and schools.

Simcox said it’s too early to talk about suite mixes or pricing since sales aren’t expected to launch until mid-2021. He added Distrikt Trafalgar may include a couple of convenience amenities, such as a coffee shop or dentist office.

Distrikt Islington Village is a townhome development on Burnhamthorpe Road that’s located about 500 metres from the Islington subway station and close to schools and amenities on Dundas Street.

It’s still in the planning process.

Simcox called it “a great example of missing-middle development” that will be comprised of townhomes slightly larger than average in size. He expects it to appeal to both move-up and movie-down buyers.

“This will be a higher-end, high-quality project that fits in with the historic Etobicoke area. We’re taking a lot of design cues from local buildings and integrating that into our design.”

Distrikt Forest Hill will feature 45 townhomes near Bathurst Street and Elderwood Drive in the upscale Forest Hill neighbourhood, where many homes sell for $5 million and up. Simcox expects the project to launch soon.

“This is a great form of gentle density, bringing in higher-end townhomes primarily for move-down buyers looking to stay in the area, but looking for a new product,” he said.

Can this many transit-oriented developers be wrong?

Steve McLean Residential Development Toronto / GTA Aug. 18 2020
Steve McLean Business reporter
Steve is a veteran writer, reporter, editor and communications specialist whose work has appeared in a wide variety of print and online outlets. He’s the author of the book Hot Canadian Bands and has taught reporting to college students. He is based in Toronto.