Dori Segal reflects on the rise of First Capital Realty 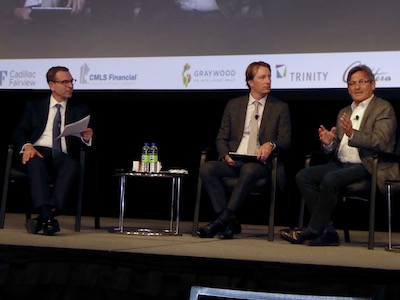 Dori Segal launched First Capital Realty Inc. with the 2000 acquisition of Centrefund Realty Corporation and helped build it into one of Canada’s largest owners, developers and operators of necessity-based real estate.

Segal was president and chief executive officer of First Capital from 2000 until February 2015, when he was succeeded in those positions by Adam Paul. Segal continued to serve as chairman of First Capital until stepping down on June 4, but remains a director of the company that owns interests in 166 properties totalling approximately 25.4 million square feet of gross leasable area.

Paul and CBRE Canadian Capital Markets president Peter Senst interviewed the 57-year-old Israeli executive at the May 29 Land & Development conference at the Metro Toronto Convention Centre, offering Segal a chance to reflect on his career.

Segal admitted his only real estate experience before officially entering the business came when he invested $50,000 in 1985. In the end, he said, he lost $65,000 on the investment.

That didn’t dampen his enthusiasm, however, so in 1992 Segal told lawyer, real estate entrepreneur and Gazit Globe founder Chaim Katzman he was willing to invest all of his money to become involved in the sector.

Katzman became a mentor, and it led to a longstanding relationship between the two. Segal is now a Gazit Globe director after holding other executive positions for the global owner, developer and operator of supermarket-anchored shopping centres and retail-based, mixed-use properties.

“One of the things he taught me, that I’ve always remembered, is that real estate is a great business,” Segal said of Katzman. “It’s a little slow over the first 30 years, but if you’ve been in business for 30 years and you haven’t gone bankrupt, you’re probably doing OK.”

Segal has certainly done OK for himself and for First Capital. But when asked what advice he’d offer young people in the real estate industry, he offered what might be a surprising reply: “Don’t be me, because I wake up every morning with a true sense of failure, wondering what I could’ve done better.”

The early years of First Capital

As part of First Capital’s acquisition of Centrefund, the Canadian company insisted it must stay on as property manager for four years because it already knew the market well and could handle leasing.

“That gave me four years to focus on the investment side of the business, looking after development and creating things for the future,” Segal said.

It was time he spent well, learning what he liked and didn’t like about the business operations.

“It gave me a very nice break from the business itself because I knew that was being taken care of,” said Segal.

Shopping centres in urban locations have been First Capital’s focus, but Segal conceded it was a challenge to break into the Canadian market. However, he was willing to overpay to get the best sites.

Segal said these are in close proximity to gyms, medical services, coffee shops, schools and daycare centres because they bring people to his locations — sometimes twice a day. Most patrons of First Capital-owned sites live within three kilometres and visit three times a week, he added.

Land is the most important thing

First Capital has invested so well that Segal said it can double the density of its portfolio just through the intensification of the assets it already owns.

“We always paid attention to the basic things in real estate: location, how much are we paying per square foot, and what would happen if more competition came into that node,” said Segal. “We sometimes bought competition in the same node because we felt it was easier to compete against us than somebody else.”

Passing the baton to Adam Paul

Segal told Paul he believes the new CEO has a more difficult job moving First Capital forward than he did in forming and growing the company. He noted it’s now bigger, has more employees and is involved in more complicated mixed-use properties.

“You don’t get the credit from the past,” Segal said. “You’re only going to get the obligation for the future.”

First Capital took advantage of declining and low interest rates when Segal was at the helm, and he said the Canadian real estate industry today is much better run, with tougher and smarter competitors.

Some of the First Capital accomplishments Segal is most proud of include:

* emerging from the 2009 economic downturn in “very good shape;”

* the attention paid to environmentalism and sustainability at its properties.

“The one thing I’ve struggled with is the mismatch between being a real estate developer and a public company,” Segal said, noting developers have longer time horizons than capital markets.

Segal noted some of First Capital’s biggest sites — including Liberty Village and Yorkville Village in Toronto and a large property in Calgary — involved assembling assets over time. Those properties might have initially delivered very low returns, but they fit into long-term plans to create comprehensive properties which probably can’t be duplicated.

Despite being a multi-millionaire, Segal told the large audience he’s very concerned about the gap between rich and poor. While assuring people he’s not a socialist and is “a true capitalist and a true greedy guy who wants to make money,” he also stated:

“I do believe that we have an archaic tax system which, fundamentally speaking, taxes capital very little and taxes work fully.”

Big businesses are thriving because of the middle class, which carries the economy, Segal said.

“Once tax inequality and the gap between rich and poor gets wider, I think the economy gets into risk.”