Although Montreal’s downtown is going through tough times like most urban cores around the world,... 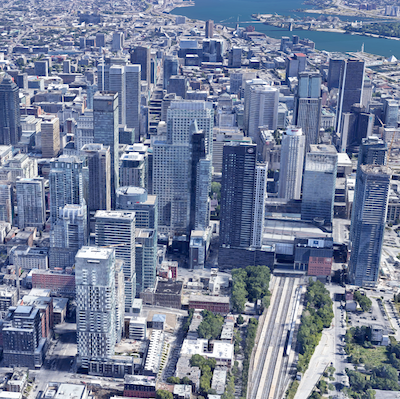 Although Montreal’s downtown is going through tough times like most urban cores around the world, “it is holding its own” and should soon be on the road to recovery post-pandemic.

That’s the optimistic view of Glenn Castanheira, general manager of the business development association Montréal Centre-Ville. He was speaking during a Feb. 18 webinar in which his association and the Urban Development Insitute (UDI) of Quebec presented a report on the state of downtown Montreal.

Compared to others, Montreal’s downtown is in an “enviable situation,” with many of its pre-pandemic assets still in place, Castanheira said.

One of downtown Montreal’s key strengths is the number of people who already make it their home. For example, the growing downtown borough of Ville-Marie once again has almost the same number of residents as it did in 1966, when 110,000 people lived in the city core, said Jean-François Grenier, senior director at Altus Group.

While “the crisis has normalized working from home,” Castanheira said a large number of former downtown workers would like to return to the city’s core because they enjoy the downtown experience.

A survey of 1,000 Montrealers conducted between Jan. 6 and 14 found 51 per cent believe downtown’s ambience serves as a motivation to return to the office.

The survey also asked employees what type of office they’d like to return to post-pandemic, with 36 per cent saying they would like to work in open plan offices with cubicles/dividers.

Twenty-nine per cent expressed the desire to look for closed offices with private doors, slightly more than the 25 per cent preferred open-plan offices without dividers/cublicles. Ten per cent opted for a closed office with one door, shared with a few co-workers.

Danny Déry, vice-president of the employee experience consulting centre at National Bank of Canada, said it is evident layouts of downtown offices will not be the same post-pandemic, but that their designs have not been finalized.

He noted construction remains on schedule for the National Bank’s $500 million-plus head office at 800 Saint-Jacques St. W., scheduled for completion in two years. Construction has reached the seventh floor of the 40-storey building.

Companies in larger, more prestigious class-A buildings – which comprise 60 per cent of downtown office space – are doing better during the crisis. The 9.8 per cent class-A vacancy rate was nearly unchanged from Q2.

However, in the good news department, among downtown residents who are thinking of moving, half want to remain downtown. Downtown is also the destination of choice for as many as 20 per cent who live elsewhere in the city.

In Q4 2020, about 70 per cent of downtown employees worked from home more than three days a week. However, the number of people working solely from home declined from 56 per cent in Q2 to 51 per cent in Q4.

The survey found two-thirds of respondents (67 per cent) would like to continue to work from home more than three days a week after the pandemic ends. However, that’s a decline from the 76 per cent who had those sentiments in the second quarter.

In terms of retail, the report found little change between the second and fourth quarters of 2020. Overall, 28 per cent of downtown stores are vacant, compared with 26 per cent in Q2.

The number of vacant stores on Sainte-Catherine Street now stands at 23 per cent compared with 18 per cent in the second quarter, the only statistically significant change. Fifty-four per cent of stores in office buildings are vacant, the same as in Q2.

Recovery “just a question of time”

However, Voland said there is a lack of daycare, elementary and high schools downtown, which is a major drawback for families wishing to live in the core.

Voland said developers will need to rethink the design of modern buildings, which are problematic during a pandemic.

“Old buildings always had windows that opened,” she noted. “People would be much more secure if there isn’t just a single ventilation system.”

Business plans will need to be completely rethought and property owners and governments will have to work together to provide more public and community spaces in downtown buildings, she said.

Marie-Andrée Boutin, executive vice-president, retail and head of development at Cominar REIT (CUF-UN-T), said businesses will have to develop solid communication plans with employees to accelerate their return downtown.

Given people’s hesitation to take public transit – public transit use downtown is only 22 per cent of what it was pre-pandemic – free parking should be considered at least temporarily to encourage employees to return downtown when the pandemic wanes, Boutin said.

Next year’s scheduled opening of part of the new REM light-rail system from the South Shore to the Cominar-owned Gare Centrale (Central Station) downtown should encourage some people to return, she said.

Mario Toneguzzi Residential Downtown National Feb. 16 2021
D
Danny Kucharsky Business reporter
Danny is a multiple award-winning journalist based in Montreal, who has written for about 75 magazines and newspapers in Canada and the U.S. His credits include The Globe and Mail, Montreal Gazette, Maclean's, Chicago Tribune and a wide variety of business, specialized trade and medical magazines. Danny was also the Montreal correspondent for Marketing Magazine for several years.