A series of office and retail transactions early in 2020 emerged as the top commercial real estat... 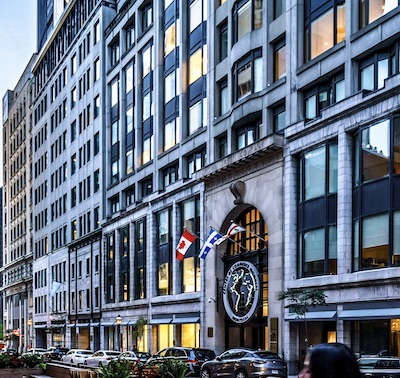 The World Trade Centre Montreal was the largest commercial real estate transaction in Montreal in 2020, according to CBRE. (Courtesy CBRE)

A series of office and retail transactions early in 2020 emerged as the top commercial real estate transactions in the Montreal area during the past year.

There were two distinct periods of major activity in the city – early and late in the year – sandwiched around the most significant shutdown periods caused by the COVID-19 pandemic. Economic uncertainty reduced the number of transactions through last spring and much of the summer.

Many of the deals which did take place were conducted off-market.

The industrial investment market rose to unprecedented heights in the fall, according to Scott Speirs, CBRE’s executive vice-president and practice lead for Montreal’s national investment team.

“Investors were looking at assets where lease terms were short and they were less concerned about covenant, and again focused on the rental growth potential of industrial assets,” Speirs told RENX.

“On the office and retail side, there was again more confidence, but selectively so, with more focus around lease term and covenant. As long as there was income security, investors were more confident.”

There were also some sales of retail assets with repositioning potential through adding density.

Residential and industrial land pricing held up very well through the economic downturn.

“Multifamily held strong through most of 2020,” said Speirs. “There was some softening toward the back end of the year as rents began to be negatively affected but, generally speaking, multifamily continues to be resilient.”

Private Canadian investors accounted for 53.1 per cent of the purchases.

Speirs expects commercial real estate investment to be very strong in the latter part of this year as long as COVID-19 vaccines are effective and widely administered and day-to-day life moves closer to what it was like pre-pandemic.

While lease term and covenant will remain critical, Speirs expects the office and retail sectors to bounce back. He said industrial will continue to be Montreal’s top performing asset class for the foreseeable future.

“The challenge there is the pricing is so strong that it’s very difficult for investors to make returns work and there’s so little in the way of inventory.”

Below are Montreal’s 10 biggest commercial real estate transactions of 2020.

1. The 562,589-square-foot World Trade Centre Montreal office and retail complex at 747 Square-Victoria in Ville-Marie was sold Jan. 28 by Ivanhoé Cambridge to Allied Properties REIT for $276 million. The class-A central business district office property was 90.7 per cent leased at the time of the sale, with 81.6 per cent of tenants being investment grade, providing stable cash flow with income-enhancement potential. “For Allied, it’s an opportunity to reposition an extraordinary asset as more of a creative loft office-style building,” said Speirs.

2. Cadillac Fairview sold a 50 per cent share of the 1.24-million-square-foot CF Carrefour Laval in Laval to clients of TD Asset Management Inc. for $252.83 million on Jan. 14. While it’s widely considered to be the premier shopping centre in Quebec, the property also has significant upside potential for mixed-use development.

3. A 565,163-square-foot office building at 1100 René-Lévesque Blvd. W. in Ville-Marie was also sold on Jan. 14 by Oxford Properties Group and Desjardins Financial Security to Groupe Mach and Groupe Petra for $225 million. The class-A property in the downtown core has a strong and diversified tenant roster with secure cash flow and upside potential through value-add opportunities. “Their intent was to invest in the building and grow the rents over time by improving the common areas and generally modernizing the building,” said Speirs.

4. The 300-unit Le Cartier apartment building at 1115 Sherbrooke St. W. in Ville-Marie was sold on Dec. 23 by a private vendor to The Benvenuto Group for $107 million. One of downtown Montreal’s most famous multi-residential buildings, is set to undergo significant capital improvements to gradually increase rents.

5. The 300 rental units comprising the third and fourth phases of the EQ8 multifamily development at 6790 Newman Blvd. in LaSalle were sold on Jan. 10 by Armco Immobilier Inc. to Manulife Investment Management for $105 million. The recently constructed apartment is on a large commercial artery surrounded by a residential community and has easy access to public transit and a highway network.

6. The 138-unit Le Art apartment building at 1437 René-Lévesque Blvd. W. in Ville-Marie was sold on Nov. 30 by Groupe Daca to Centurion Apartment REIT for $72.43 million. It’s in a prime downtown location with exceptional transit accessibility.

8. A 279,263-square-foot office building at 1450 City Councillors St. in Ville-Marie was sold on March 31 by Sternthal Realty Inc. to Crestpoint Real Estate Investments Ltd. for $70.2 million. The loft office property near the Quartier des Spectacles entertainment district offers excellent retrofitting potential. The area is undergoing major revitalization as a technology and media hub with plenty of leasing momentum and rental growth.

9. The 346,286-square-foot Faubourg Langelier retail property at 7225 Langelier Blvd. in Saint-Léonard was sold on July 10 by Carrefour Langelier Inc. and Columbia-Wertek Inc. to Groupe Mach for $60 million.

Danny Kucharsky Commercial Transactions Greater Montreal Jan. 15 2021
Steve McLean Business reporter
Steve is a veteran writer, reporter, editor and communications specialist whose work has appeared in a wide variety of print and online outlets. He’s the author of the book Hot Canadian Bands and has taught reporting to college students. He is based in Toronto.