Montreal developer RoseFellow has gone into the trucking business to acquire a site in Dorval in... 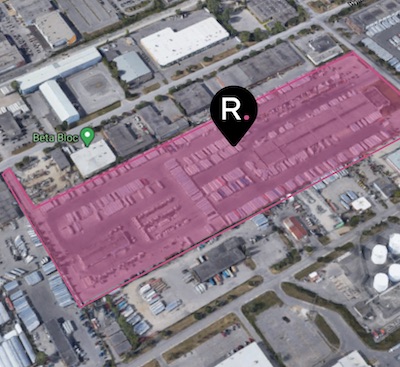 Montreal developer RoseFellow has acquired 2800 André Ave., in Dorval, and is considering the property for a stacked industrial redevelopment. (Courtesy RoseFellow)

Montreal developer RoseFellow has gone into the trucking business to acquire a site in Dorval in Montreal’s West Island that could become home to the city’s first multi-level (or stacked industrial) distribution centre.

The developer paid $34.25 million to an Ontario businessman to acquire the 1.14 million square foot site at 2800 André Avenue in Dorval that is home to Terminal 2800, a truck trailer parking business.

“We didn’t buy technically real estate. We bought a business. Sam and Mike are in the trucking business,” said Mike Jager, a principal of RoseFellow along with Sam Tsoumas. “Not only did we buy the real estate, we bought the business that comes with the real estate.”

Tsoumas told RENX in an interview the purchase price of roughly $32 per square foot “is a steal,” given that it includes a revenue-generating business.

Current zoning at the site would allow for the construction of a traditional distribution centre of more than 650,000 square feet, he said.

Although the site is close to Trudeau International Airport in Dorval, it is not subject to airport height restrictions, meaning RoseFellow could build a 100-foot high building to accommodate stacked industrial.

As a result, “one of the plans we’re working on with our architects is to build the first multi-level industrial distribution centre in this part of Canada,” Jager said.

However, doing so would require a change in “archaic” zoning regulations that currently allow only single-level industrial buildings, Tsoumas said. RoseFellow hopes to submit a plan for the site to the City of Dorval within months.

“Everything someone in ecommerce is looking for is within a stone’s throw away,” he said.

Tsoumas said the total project cost for a single-level, 650,000 square foot building would be about $100 million.

RoseFellow should have an idea within three to six months as to whether a traditional or multi-level industrial building will rise at the site.

The West Island “is probably the best industrial market” in the city, with the lowest vacancy rate. Dorval’s availability rate is at an all-time low of 1.5 per cent, he noted.

According to CBRE’s Q4 2020 Quarterly Statistics Report, the overall availability rate in Montreal’s industrial market has dropped to an all-time low of 2.1 per cent.

“We’re firm believers in industrial. I think the market speaks for itself,” said Jager, noting rental rates in the GMA have risen close to 20 per cent year-to-year.

Instead, Jager and Tsoumas looked at Google Earth and mapped about 100 sites in the Montreal area that were of interest. The RoseFellow principals then teamed up with brokerage JLL – to provide them with anonymity – to secure the deal.

“There’s no special secret to it,” said Jager. When the company finds a site of interest, “we take a quick drive-by. When we do like it, we attack them. We will literally knock on doors and hopefully come to terms.”

The 2800 André site currently includes two buildings of 100,000 and 24,000 square feet which are rented for a few years to 11 different groups, as well as hundreds of trailer parking stalls.

RoseFellow used traditional financing and a limited partnership with Fit Ventures LP, a group of local investors, to finance the acquisition of Terminal 2800.

Tsoumas said an advantage of the site, as it awaits development, is that trailer parking costs have “exploded” in the Montreal area, more than doubling in the past few years. There is a limited availability of prime spots, as more and more of the facilities are being redeveloped.

Update on RoseFellow’s other projects

Elsewhere in the West Island, RoseFellow plans to start building on spec a 325,000 square foot industrial building at 151 Reverchon Avenue in Pointe-Claire on May 1. The company acquired the 650,436-square-foot site site last year and originally planned to commence construction in 2022.

‘We’re speeding it up by a year,” Jager said. “We feel that by the time the structure is up, we’ll have a deal in place.”

Construction should be completed by April 2022.

Also on May 1, RoseFellow will begin construction on spec of a 125,000 square foot industrial building at the corner of Marien Avenue and Highway 40 in Montréal-Est. It’s the first phase of a two-phase project planned at a site RoseFellow acquired last year.

The building should be completed seven months after construction begins.

In addition, RoseFellow is finalizing plans to build on spec a 125,000 to 150,000 square foot industrial building in Casselman, Ont., about 55 kilometres east of downtown Ottawa. It would be the first phase of a three-phase development at a site acquired last year.

“We’re working on a potential build-to-suit that would change the plans a little bit,” Tsoumas said.

RoseFellow plans to announce a second residential development in Montreal this summer and two additional industrial deals will be notarized in February.

‘Sky is the limit’ for Montreal’s industrial leasing rates

Don Wilcox Residential Transactions Greater Montreal Jan. 6 2021
D
Danny Kucharsky Business reporter
Danny is a multiple award-winning journalist based in Montreal, who has written for about 75 magazines and newspapers in Canada and the U.S. His credits include The Globe and Mail, Montreal Gazette, Maclean's, Chicago Tribune and a wide variety of business, specialized trade and medical magazines. Danny was also the Montreal correspondent for Marketing Magazine for several years.